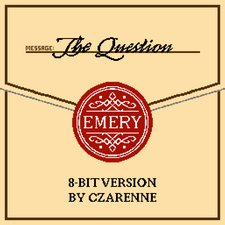 
This year, among other things, was a year of celebration for an album called The Question, which was released by a band called Emery. Sure, Emery also released their [arguably] best album yet this year (You Were Never Alone), but it was ten years ago that The Question blew away everyone's expectations. To celebrate the milestone, Emery joined As Cities Burn on a tenth anniversary tour, and the album finally got a vinyl release courtesy of Tooth & Nail and Capitol Records.

But that's not all! In an interesting and unexpected turn of events, a fan of Emery's, whose screen name is Czarenne, translated the entire album into an 8-bit extravaganza. Yes, from "So Cold I Could See My Breath" to "In A Win, Win Situation," it's The Question like you've never heard it before. Other bands have done similar types of 8-bit reimaginings to singles (Anberlin and August Burns Red come to mind), but it's pretty impressive and mesmerizing to hear a whole album's worth. What's particularly noteworthy is that the tracks are very detail-oriented. Every note, riff, and beat is accounted for; there are even things that stand out that I never realized were in the original version. Sure enough, upon listening, there it is, loud and clear. It's incredible to listen to an album ten years later and find new things, even if they are small bits. Many kudos to Czarenne for causing me to go back to listen deeper.

Quite obviously, the 8-bit version of The Question is mostly going to appeal to those who are fond of the original. If you've yet to discover this gem, it's never too late to get on it. After all, it's free (as of writing this) on Emery's Bandcamp. And if you close your eyes while listening, you may get visions of Nintendo games playing in your mind, with tracks like "Returning The Smile You Have Had From The Start" and "The Terrible Secret" acting as the soundtrack. I may have to play some NES games on mute and play this as loud as possible.