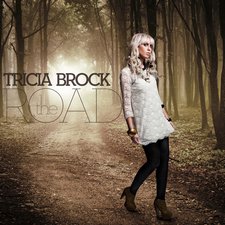 For many artists, their most personal stories are their inspiration, and for Tricia Brock, there's little exception. As a collaboration between the Superchick frontwoman and her husband, Nick Baumhardt (former guitarist for Thousand Foot Krutch), Brock's debut as a solo artist, The Road, takes a softer and more personal turn from her usual rock tendencies, and the result is, for the most part, a refreshing journey for her listeners.

To be clear, for anyone expecting another Superchick album, The Road isn't it. In fact, it's more of an adult contemporary worship album than like her previous work; on one hand, this could sound like a disastrous change for Brock, but on the other, the project was influenced by the right people to make a complete album without too many potholes along the way. While it's not a rock album by any means, Superchick-like leanings are obvious, especially to those familiar with her past work. It's a very similar situation to Rebecca St. James' I Will Praise You; it's a trademark product of the singer, but with a markedly different spin. A healthy dose of both originals and covers comprise The Road, but every song was handpicked by the couple to relate to their lives' circumstances and trials, giving the project far more character than an average worship album.

"Breath of God" and "Lean" are masterful openers, giving the listener an accurate idea of the rest of the record and grabs their attention right away ("Breath of God, You give us life/only You can satisfy/Pour Your love over us/let it rain down from above/As we cry Holy, Holy God"). In some ways, it reinvents the worship wheel and doesn't offer too many surprises, but it's obvious that Brock is an experienced performer and songsmith. "Broken For Love's Sake" showcases the best songwriting on the project ("When it gets hard You go before me as a shield/When it's too late, You come behind me and You heal/Should my heart break when love's the only way/So be it Lord, may I be broken for love's sake"). No doubt influenced by Brock and Baumhardt's lost child, the song is the most accomplished on the album.

The Road isn't a project that breaks new ground in the worship realm, and that's probably the biggest drawback to the record. One could argue this personal project wasn't meant to be a masterpiece of the genre, but why it doesn't make better strides to be truly creative in its composition is a bit puzzling. The record also begins and ends beautifully, leaving the project with a positive impact, but the middle of the record struggles a bit in being distinctive. Along with an unfortunate song choice in Kristian Stanfill's "Always" (which is better than the original but still lacks in real zeal), not every song packs the biggest punch, and ultimately, it's the originals of The Road that shine the greatest.

Tricia Brock's first solo project, in the end, has quite a bit of appeal. Pleasing both fans of Superchick and the worship genre, The Road gives listeners a breathtaking glimpse into Brock's heart for worship, a side not as often seen through the singer's more-famous project. It's hard to deny that worship music has undoubtedly been done better than what's presented here, but regardless of its musical creativity, The Road is full of talent and optimism, and many a listener will want to tread it.