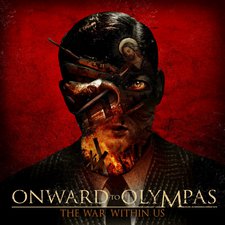 Onward To Olympas
The War Within Us

Only fourteen months ago, the debut album from Facedown Records' Onward To Olympas was released. Despite being released the same month as the return of the powerful Living Sacrifice, Onward To Olympas managed to put forth a pretty good effort, with This World Is Not My Home garnering multiple plays in hardcore fans' iPods. March 15, 2011 is the date for the unleashing of their sophomore outing with Facedown, The War Within Us.

One of the things that Onward To Olympas' debut album possessed was power. Though they completely stayed within the realms of hardcore music, there was a power and energy that existed there. The album was by no means amazing, but they held their ground, and I would venture to say that they made themselves one of the top bands in the Facedown family. Fortunately for them, they were able to maintain that power and keep it up for The War Within Us. The songs have a tendency to make the listener feel pumped and pretty tough; what's cool is that, while the listener is feeling tough, they can rest assured that they're getting an amazing message, as well. Like all Facedown bands, Onward To Olympas is completely Christ-focused. Sometimes they're defending their faith, sometimes they're fighting the enemy, and sometimes they're proclaiming their hope.

While The War Within Us does have a good deal of power in its songs, Onward To Olympas don't limit themselves to only making hardcore music. "The March" is a two-minute semi-ballad, with more of an indie-style guitar structure. The last quarter of the song picks up with heavier guitars and some screaming in the background, but the vocals are melodic the entire way through. It seems rather cliche these days to name the hardcore band's "slow song of the album" as the top song, but despite the cliched-ness, "The March" is one of my favorite tracks, and one of the album's defining moments (it almost makes me wonder what Onward To Olympas could do if they made a straight-up indie album). But the guys are certainly skilled in the hardcore aspect, too. The album's final track, "Rebuilt," is kind of all over the place, musically, but is crafted well, and displays every member's talent (great guitar work, beautiful double bass, and the screaming goes from heavy to lighter all throughout). They put all of their talent on display on this album from start to finish.

The War Within Us is certainly not a perfect album. Some of the music drones at times, and there are a couple of instances where the album goes to the next song without the listener even realizing it. But overall, the production gives it a pretty good sound, and the band is talented, presenting it with some well-written hardcore music. Whether or not it's better than its predecessor is up to the listener to decide, but Onward To Olympas has some more goodness on their hands. Metalheads will enjoy this, no doubt.