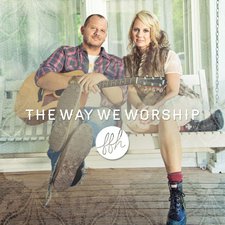 FFH
The Way We Worship

FFH is well into their third decade of making music and still going strong even as they are past the peak of their popularity. After something of a hiatus in 2007, the duo of Jeromy and Jennifer Diebler, with total album sales numbering around 2 million, are now releasing music under their own label (distributed through Provident Label Group). This past year, FFH released their second worship album, and 11th studio album since their major label debut, The Way We Worship.

A quick glance through the track list will reveal a lot of familiar song titles; that's because of the twelve songs included in this recording, only three are original compositions. Considering the route countless other worship albums have taken recently, this isn't all that surprising. However, only two of the other nine songs were written in this generation. The other seven songs are all covers of classic hymns. There is definitely a strong point and a weak point to this album and it falls very clearly on this fact; combining the beauty of the duo's harmonies and acoustic instrumentations with timeless lyrics and classic melodies is a nearly perfect combination, but combining them with modern corporate worship is nothing we haven't heard before.

I'll start with the five songs which are either originals or modern covers. First off, the two non-originals are "As For Me" and "Always," both written by Jason Ingram and originally recorded by One Sonic Society. "As For Me" is a classic corporate worship anthem. The verses build into the soaring chorus with a powerful bridge and declarative lyrics; in other words, everything that does NOT play towards the strengths of FFH, and yet it is the lead single from this album. For me, it would have been my last choice, but it fits well into everything else on Christian radio presently. "Always" is a little better (they tone down the strength of the instruments a bit), but still is not what FFH does best. As for the three FFH originals, one ("Glorious King") is yet another song that will fit right into the corporate worship circle, one ("I'm Coming Home") is not really a worship song (rather, more like the type of song found on their typical studio release), and the third ("First Love") could fall into either category. There is nothing about the songs that will stop people from enjoying them (particularly "I'm Coming Home," the sound of which is classic FFH), but they otherwise fall squarely into the categories of average and unimpressive.

But the strength of this album lies in the hymns. The combined age of these seven songs would put Methuselah to shame, and there is a reason they have endured. These songs themselves are great, but FFH gives them new life in the form of a tender, lullaby-like sound. Not surprisingly, the idea for this album was inspired, quite literally, by the songs that Jennifer Diebler sang to their children as they went to sleep, and their desire for some of those songs to be recorded for posterity (Anyone want to take a wild guess as to which of these twelve songs she sang?). They are all primarily quieter acoustic songs with most of them also featuring either a banjo and/or mandolin (and I even heard an accordion on one), giving them something of a classic, folksy sound. There is some electronic instrumentation, but none of it is overdone and it usually serves to enhance the overall sound. And Jennifer Dieber's vocals (as she is the lead vocalist on six of the seven) have never sounded sweeter. The biggest highlights are "In the Garden" (the song that features the accordion), "Be Still My Soul," and "Softly and Tenderly" and "Jesus Name Above All Names."

Oh, the potential that this album could have had! If they didn't feel obligated to include any "modern" worship and just did an album of these gorgeous hymn covers, FFH could have had the best release of their career. Obviously, hymn albums are nothing new (Amy Grant, Bart Millard, Jars of Clay, Leigh Nash, and even Michael Sweet are among the artists that have gone this route), but I can't think of many other artists more suited to do one than FFH. As is, though, the hymns do save this album from being just another worship album in an ever-increasing pile of "just-another-worship-album's." I can recommend this album, but with that recommendation comes this suggestion; take the seven hymns, put them on a playlist (any order you see fit), label it something to the effect of "Quiet Time Music," and whenever you are doing any extended period of praying, scripture reading, reflection or worship, listen to it. It will be one of the most intimate and worshipful experiences of your life.