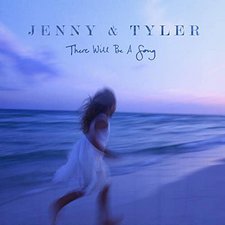 Jenny & Tyler
There Will Be a Song (Deluxe)


With There Will Be A Song, Jenny & Tyler return after a three-year absence with their fourth full-length album of new songs. This collection of fourteen songs set out to, "explore justice, love and beauty," and on this count the album delivers. For those unfamiliar with the folk/pop husband and wife team, they have been active since 2004, with their first full-length album releasing in 2010. Largely working as an independent band, they have carved out a following with relentless touring over the years. While much of what they attempt to convey here on There Will Be A Song works, there are a few times they don't quite hit the target, leaving the album a mixed bag.

The first real highlight is "Lesser god," which features guest vocals from singer/songwriter Adam Agin. It showcases a cello and violin pairing with earnest lyrics. Some of the best lines come from the chorus where they plead with God to keep them from turning to lesser gods singing, "I don't want to write that kind of song/I don't want to give them anymore of my heart/I don't want to waste the greater love/I don't want to kiss a lesser god." Next track "Somewhere A Voice Is Calling" is simple, sweet, and well executed. Sparse lyrics float atop a bed of strings and light piano accents. The harmony lines blend nicely as the song continues to build toward a key change in the bridge, led by light percussion and vocal urgency from the duo.

"Love I Am" is one of the best examples of the biggest drawbacks of the album. It has impactful lyrics supported by acoustic instrumentation, that gets undermined by the vocals; specifically the lack of blend of Jenny & Tyler's voices. In this reviewer's opinion, it keeps the song from ever truly reaching its lofty potential. Unfortunately, this crops up again with "I'm Sorry" and "When I Hold Your Hand I'm Home," as well as the title track, holding back an otherwise excellent song. It's either a mixing issue, or perhaps just their higher registers not blending seamlessly enough. Regardless, it's a shame, as there are vivid lyrics present like, "Heading west past the cotton fields/Highway 6 in the rain/Even the trees' backs are bent and pleading/For relief from the pain."

With "Waters Roll," listeners are treated to an intense string and drum combo that push the song forward with the yearning lyrics, "Where every color, tongue, and caste is free/And all man's wickedness is finally ceased/Where every mountainside hears freedom ring/Where the waters ever-roll and the righteous thirst no more." This makes for one of the album's highlights, perhaps even the best song. "Wrote Us A Story" starts off with promise, and a pleasing chord progression, also featuring cello and violins. This serves to produce a beautiful musical tapestry that is aided by delightful harmonies. Next of note is "A Boy & A Girl (We're Getting Older)," which wins the award for best love song of the album. It's a charming back and forth about growing old together while still feeling like the younger version of themselves. Jenny takes the lead vocal singing lines like, "Darling, we're getting older/Your hair's getting thinner/And I'm getting wider/We're not the kids we once were/We're a man and a woman/Not a boy and a girl/But I still feel like that girl sometimes."

"I'm Gonna Love You To The End" marks the last song before a drop off, where they lost this reviewer's attention. Trimming the album's last three songs would have helped the overall quality of the album, as the long track list begins to blur together at this point. They are by no means bad songs, they simply pale in comparison to some of the earlier album highlights. This, and the previously mentioned vocal mixing/blending issues do most to place the album in the "good, not great" category. Still, this is a pleasant, sometimes attention-grabbing album that deserves a listen. Fans of the duo will find more to enjoy, and those uninitiated to the band will discover a few new tracks to cherry pick.

Though a somewhat uneven release as a whole, there is still plenty to like on There Will Be A Song for all fans of the folk/acoustic genre, and other bands like Johnnyswim, The Gray Havens, Vocal Few, and The Civil Wars. While not quite on the same level of excellence yet, Jenny & Tyler are well on their way, and this reviewer looks forward to hearing more from them in the future.