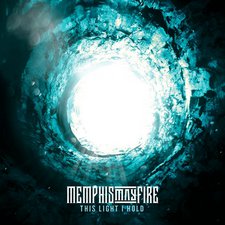 Memphis May Fire
This Light I Hold


Fans of the metalcore genre are no strangers to Memphis May Fire. Although the band had a major shakeup during the recording of their full-length debut, they have done quite well for themselves under the leadership of Matty Mullins (singer/writer) and Kellen McGregor (guitarist/writer). While MFF isn't a Christian band per se, singer Matty Mullins has been unashamed in his faith and this reflects in the spiritual nature of his lyrics. Mullins even released a full-fledged CCM album in 2014. He has caught a lot of flak, and hate has been spread on the internet, for Mullins' spiritual leanings lyrically, but he holds fast.

While Memphis May Fire's newest album, This Light I Hold, isn't as "preachy" (some would say) as Unconditional, the lyrics remain hopeful and positive in a genre of music often overrun with negativity and hate. Musically, the newest album is one of MMF's best. It's full of solid instrumentation and production -- and it's pretty dang heavy at times. You aren't presented with constant metalcore chugs at every corner, but instead, McGregor provides some nicely timed, and brilliantly executed, solos (See "This Light I Hold" and "The Antidote" for the best examples). There are also plenty of interesting guitar fills and leads to help set the music apart from similar bands. Mullin's screams and growls sound big and tough and accentuate the heavy guitars; his cleans are pretty on par for the genre, but they may be a little higher pitched than some prefer.

Many are going to prefer Memphis May Fire's earlier work, but This Light I Hold is a really solid addition to their discography. It's produced better than Unconditional and is an excellent sounding album overall. Look to "Sever the Ties," "This Light I Hold," "The Antidote," and "Better Things" for some of the better tracks present -- "That's Just Life" is also a nice sounding softer ballad type song. While it's not the best metal album of 2016, This Light I Hold is a great listen that should please any metalcore or Memphis May Fire fan.