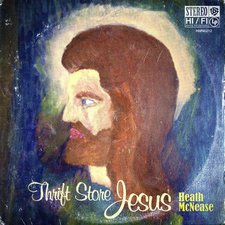 Continuing his trend of releasing quality albums at a very steady pace, singer songwriter and emcee Heath McNease is dropping his fourth full-length release in just over a year. Just like the last two, this one is another hip hop album (but this one is technically a solo album, whereas the last two were collaborative mixtapes with others). It's called Thrift Store Jesus, and according to McNease, it's "the most personal and important work of art [he's] ever released."

It's important to keep in mind that Thrift Store Jesus isn't the usual light-hearted Heath McNease material. It's not the upbeat, semi-nerdcore fun that you may be accustomed to. There are no humorous pop culture or video game references, and no "your mama" jokes. There are a few jokes here and there, but at its core, this is heavier material that focuses on the harder and sometimes darker parts of life. The parts of life that sometimes - dangerously - get neglected by the Christian music industry. But that's the emphasis of Thrift Store Jesus - God is good, but life is hard, painful, and sometimes just dirty. All this to say that when you listen, you should be prepared to contemplate things a little harder.

The "thrift store Jesus" in question is in fact the one you can see on the album cover. The song itself talks about the painting as McNease buys it from a thrift store for a buck, and the comfort he takes in it as it reminds him of the worn down state he himself is in. I love what McNease says when referencing what is ultimately not a well-done painting (and a painting of Jesus that looks like a bunch of other people before it actually looks like Jesus), "But who's to say this newbie painter ain't still moving God's heart?" I feel the sentiment here: while it's easy to get caught up in the world of "this piece of art is good" and "this piece is terrible," despite whatever truth is present in those statements, if a piece of art is dedicated to God, He finds it beautiful. This song is probably the most light-hearted of tracks on this album. The rest of Thrift Store Jesus deals with things like doubting God, such as in the opening track "Natural Disaster Baptism" and the slower "Elysian Fields," where McNease admits that he sometimes gets scared that God won't follow through on His promises. It's not always the most popular thing to write about in the Christian market, but it's sincere and very relatable.

"Groundhog Day" is one of the more biographical songs McNease has ever written, as he raps about the ups and downs of life, as is the acoustic "Blues." In the latter, McNease sings as he seems to be coming down a little too hard on himself. He describes a conversation he has with a former lover and one he has with his mother. He's down on himself while the others tell him he needs to forgive himself and let go of the past and the painful parts of life. As far as lyrics and concepts, one of my favorite Thrift Store Jesus tracks is "Heart Still Beats." As a brave Saint Saturn fan, I've always loved the song of the same name from bS2's The Light of Things Hoped For. And just as I had hoped by looking at the song title here, it is a hip hop song based on bS2's original. It's exactly what a re-imagining of a song should be. The chorus and bridge still contain the same lyrics, with each verse being the same type of story, but in McNease's own style. He does the song justice, that's for sure.

With such strong and deep lyrics, it would also become very important to have strong and deep music and beats to accompany them. McNease brought along some very solid talent to enhance the lyrical brilliance that already was. First off, the guest vocalists, though few, are excellent. Of course you know Playdough is going to be involved in some form here, and he gets in some tight rhymes on "Under Her Pillow (Warm Gun)." He sounds super comfortable in the groove of the song, and his appearance truly shines. The other three guest emcees all come together with McNease in "It's A Wonderful Life." The hook is performed by none other than Pigeon John. Unfortunately, it's a small appearance, and he does no other rapping. We do hear from both RedCloud and sintax.the.terrific, though, who both bring their own style to accentuate the track. Thematically, it's a take on the classic Christmas film, where each emcee talks about what their world would be like if they had never been born. To add to the extra talent, another Deepspace 5 member, Freddie Bruno, is responsible for the track. It's a testament to Freddie's production skills as it's one of the best beats on the album (McNease even says admits it's one of his favorite beats of all time).

And speaking of beats, Thrift Store Jesus is chock-full of talented producers. Of course, there's Bruno's track, but there's also production work from Humble Beast beatmaker Courtland Urbano (formerly known as Xperiment) in "Heart Still Beats" and "Deep Thoughts By Jack Handy," For Beats' Sake providing some tamer beats in "Thrift Store Jesus" and the closer "All Is Well," and Playdough bringing some heat with "Thought Police (Room 101)" and some co-production on "Deep Thoughts By Jack Handy." Everything else was done in almost a full-band style, with McNease teaming up with Jeremy and Dennis Michaelis from the band Red Umbrella. The Michaelis brothers, perhaps surprisingly, are a force to be reckoned with when it comes to hip hop beats. In my humble opinion, their crowning achievements on this album are probably "Groundhog Day" and "When Mama's Not Around." If I was to recommend one song for you to listen to in order to sample this album, "When Mama's Not Around" would be it. The beat, music and hook are actually borrowed from a song called "Natural One" by Folk Implosion, but with a re-recorded version of everything, including McNease's vocals. However, after the first hook, McNease takes it up ten notches with one of the best flows of the entire album. The flow and rhythm are terrific, and they fit the gritty, dirty bassline and drums perfectly. If you're not familiar with the original song, expect some sort of collision of sounds from modern artists like The Gorillaz, Beck, and John Reuben. The same thing is done with "Natural Disaster Baptism," as McNease takes the music from The Black Keys' song "Sinister Kid" (from the album Brothers), and works it to his advantage.

Thrift Store Jesus is truly an achievement for Heath McNease. He really stretched himself for this release, and the outcome is his best work to date. His creativity, faith and skill are very distinct here, and he put himself on full display; the good, the bad, the ugly - all of it. With musical influences ranging from the apparent (brave Saint Saturn, The Roots, Wu Tang Clan) to the more subtle (John Lennon, Fiona Apple, The Black Keys), Thrift Store Jesus is an eclectic mixture of songs with equally eclectic themes. My only complaint is that I'm not too fond of the vocal effect used on "A Lesson Before Dying" and "Blues," however, it's more of a personal preference than a criticism. But regardless, everyone should get this album. You can get it for free, or you can donate and get some cool stuff in return. Either way, get this album.