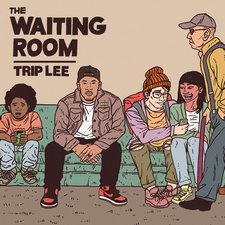 
Trip Lee, along with most every other Reach artist, has become a household name in the CCM and CHH scenes. Even folks that don't typically listen to hip-hop and rap are familiar with Trip. Thankfully, the rapper-turned-pastor hasn't been able to leave the rap game behind. The Waiting Room is his second release since stating he was stepping away from music. While Trip has certainly walked away from touring the way he once did, he has since clarified he was going to continue to make music while training to be a pastor. His newest mixtape was inspired from a line from the song "Take Me There," featured on The Good Life, in which he compares this life on earth as "the waiting room" in general, but more pointedly for Christ's return and Heaven.

The first three tracks serve as a fabulous introduction with the single, "Too Cold," standing out the strongest in the group. The mixtape gets more serious and honest, though, with "IDK." Trip raps to the slower beats about his personal struggles of the feelings of unanswered prayers. He bares his soul as he spits, "I threw my prayers to ceilin', but I feel like You don't get 'em for so long. You ain't been there when I'm slippin'; You seem indifferent while I sit here alone. Why don't You care how I'm feeling, I'm doubtin' 'bout to be dippin' 'cause You gone. Why should I wait for Your healin' You ain't gon' make me the villain in this song. And I'm just bein' real when I say" We've all been in a vulnerable point in our lives where we've questioned God and wondered why prayers haven't been answered -- even if no answer is the answer -- and so many can relate to Trip's feelings in the song. "Ready" maintains that slower pace in a song to his father, with excellent vocals provided by Dimitri McDowell. Fellow Reach artist, and 116 Clique alum, Tedashii joins Trip for the extremely 116-esque "Still Unashamed." After a couple of slow jams, followed by a couple smoother sounding joints, "Out My Way" returns to the pace and feel of the opening tracks. While "Longer" slows things back down quite a bit, "Billion Years" returns the album to the same vibe found in "Still Unashamed" and "Money Up." While it's a decent track, "Billion Years" just doesn't carry the weight that "IDK" would've carried as the closer, or the heat of a track like "Too Cold." Instead, it's just lukewarm and a bit underwhelming as the mixtape's final song.

Trip Lee is a true professional and has released some stellar material throughout his career. The Waiting Room should go down as an enjoyable listen for fans of the rapper, as well as hip-hop/rap fans in general. However, this is far from Trip's strongest effort and fails to reach the high watermark set by The Good Life and continued by Rise. I believe most listeners are going to find that the fire of "Too Cold," and the brutal honesty of "IDK," carry this album and make it a worthwhile purchase. It's good to see Trip Lee find common ground in continuing his ministry making rap music while also working towards his ministry goals of being a pastor, and it's always good to hear from him in whatever medium he so chooses to present his message.

Trip Lee has established himself as one of the best rappers in Christina hip hop today, and the first few tracks on The Waiting Room are straight fire! "Clouds" has GAWVI and Dirty Rice production which may actually burn your house down, while Trip flows superb rhymes with lyrical gems like, "That feeling when you're walking in your calling, ain't no turning back. I'm all in, I ain't finished just watch." "Too Cold" comes along next with the rapper reminding listeners to stand strong in their faith, while "Lord Have Mercy" drops the fantastic one-liner, "If only God can judge me, what lawyer goin take me on?" For the most part, the rest of the album will be solid rap joints with standout tracks like "Ready," giving that nice softer reprieve and "Billion Years," which has worshipful tones, making for a solid ending track. Not every song on the short ten-track listing is awesome, but other than "IDK," every track can be played on repeat for your rap enjoyment. The purpose of the release is to remind listeners to be patient during all times and to keep putting your trust in the Lord, and Trip makes that point very well. The rapper/author/pastor was recently quoted saying that "We're always waiting for things to be made right" and The Waiting Room drives that point home in an uplifting and Godly way. This isn't going to be the best CHH album of the year, but if you dig Trip Lee or rap tunes in general, this is definitely worth picking up. - Review date: 12/15/16, Kevin Hoskins