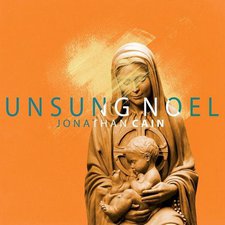 
When Jonathan Cain, keyboard player for classic rock behemoths, Journey, released an inspirational album last fall, a good number of those who gave it a listen probably did so out of curiosity as much as anything else. Now that the 2016 effort, What God Wants to Hear, is firmly in the books and the novelty of a popular mainstream artist putting out a Christian-themed record has worn off a bit, any follow-on project by the talented Chicago native is left to rise or fall based on its own merit.

To that end, Cain's newest album, a holiday project titled Unsung Noel, starts off promisingly. The leadoff cut, "This Is the Heart of Christmas," has a warm, reassuring sort of texture that makes it sound like a decades-old Christmas classic, despite its far more recent creation. The equally winning "Star of Bethlehem" has a slightly more mysterious aesthetic to it, which is only fitting in light of the fact that those who first saw the star were filled with awe and wonder. And most modern-day praise-oriented acts would do well to study the hushed reverence that laces the superb "Emmanuel" to garner a sense of what true worship should sound like.

A handful of the original compositions, and even one or two of the four cover tunes, are less gripping than the abovementioned tracks, particularly those toward the back half of the proceedings, where it becomes a bit more challenging to distinguish one from the other. That said, while the strongest numbers on What God Wants to Hear are arguably better than Noel's winningest entries, the songs on the new project have a unifying sonic and lyrical aesthetic that allows them to fit together into a more cohesive and seamless whole than did their counterparts on the former release.

The notion of filling a holiday-themed effort with original compositions deserves some measure of praise as well, given that it would have been far easier, and arguably more commercially viable, to pad the record with a larger number of well-worn Christmas chestnuts certain to resonate with a more substantial portion of the listening audience. Those secretly wishing for Cain to issue an album that sounds exactly like his work with Journey are likely to be disappointed this time around, just as they almost surely were with What God Wants to Hear. Those willing to toss expectations aside and train themselves to appreciate the semi-lost art of subtlety and understatement, on the other hand, are sure to find much to love on Cain's enjoyable and impeccably-crafted latest offering.