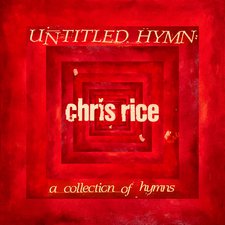 
Over a decade had passed without hearing any new music from legendary singer/songwriter Chris Rice, but earlier this year, he released an amazing split album with Andrew Ripp. Just a few short months later, he's dropping another surprise release, Untitled Hymn: A Collection of Hymns. This ten-track album may not have the most incredible album artwork or the most unique premise, but it most assuredly deserves the warmest of welcomes.

In addition to a redux of his own "Untitled Hymn," a track which Rice penned long ago, the album features a hearty collection of hymns from the past few centuries, plus a new offering at its close. Opening with "What a Friend We Have in Jesus," Rice sets off on the right foot. The smooth, reflective mix is hopeful and cheery, but adds in just a tinge of melancholy. Other album highlights include the string-focused "O for a Thousand Tongues to Sing" and a lovely rendition of "Fairest Lord Jesus." The addition of a children's choir on "Hallelujah What a Savior" serves to mix things up in a tasteful fashion, while the true-to-form "There is a Fountain" is markedly an album highlight.

Rice's rendition of "Were You There" moves in a curiously different direction. Personally, I found it a little jarring, but I'm sure others will also be quite enthralled with his take. "When I Survey the Wondrous Cross" likewise has some odd timing in the chorus but is otherwise excellent. The closing track, "Too Much I Love," is a short, new offering from Rice, and serves as a sweet, gentle, and original finale.

Ultimately, Rice does an exceptional job when it comes to track selection. Paring down the number of hymns to include is a difficult task indeed. The album carries a simple and quaint atmosphere, where Rice does justice to almost all of the selected hymns. In this sad era where artists feel the need to "breathe new life into" (i.e. mutilate, botch) Christian classics, Rice instead honors them in a refreshing manner. In fact, it's a challenge to find modern, gimmick-free versions of many of these offerings.

If you're a fan of Rice, or just enjoy quieter, traditional worship music, you'll find a lovely trove of wealth on this collection. If you're unsure, I urge you to give this album a chance; revisit the works of art and praise which defined the lives of believers for centuries. Hearing them in their original forms once more may offer you more than just an enjoyable listen.

When an artist re-releases a new version of an old song, fans could assume it's a record label cash-grab. But on Chris Rice's newest project, the song "Untitled Hymn," originally from Run the Earth, Watch the Sky, works really well alongside traditional hymns like "When I Survey the Wondrous Cross" and "Leaning on the Everlasting Arms." It's definitely a stripped down album, with Chris's sincere vocals accompanied mainly by piano or guitar. "What a Friend We Have in Jesus" opens the record with a folksy guitar line and bluegrass-like harmonies, while "Amazing Grace" is backed by contemplative piano, strings and some cool ambient reverb. The differences between this version of "Untitled Hymn" and the original are very subtle, with backing vocals and a little nylon-string guitar apparently being the only change. Like many of Chris Rice's songs, this one holds up extremely well. The rest of the album is also consistently good, though Rice's version of "Fairest Lord Jesus" is a standout. It may not be as lyrically deep as some of the other hymns, but it's definitely one of the most beautiful in terms of melody and that undefinable something in Rice's voice. Rice might add the occasional chorus or some other minor tweak, but nothing here detracts from the reverence of these hymns. Basically, since everything is so solid, there's not much to elaborate on. But if, like me, you haven't listened to Chris Rice in a while, you forget how amazing and expressive his voice really is. Sure, Untitled Hymn isn't "revolutionary," but we wouldn't want it to be. It's simply a no-frills collection of truths inspired by the Bible, and sometimes that's all we need. - Review date: 5/15/19, Andie Hardee of Jesusfreakhideout.com