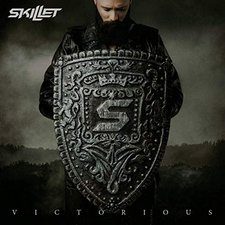 
Almost as if heralding the closing stretch of the summer season, longtime Christian rock band Skillet is prepped to release their 10th studio album, Victorious. Ever since 2003s Collide, the band has continued this chain of melodramatic album titles which, while once amusing, has since grown somewhat heavy-handed. Embodying the unbridled power of teenage angst, Victorious wields several quality melodies and some skillful instrumentation, yet finds its metaphorical flag knocked to ground when compared alongside the bands earlier material.

Opening for Victorious is the albums first single, Legendary. The track nearly sounds as if frontman John L. Cooper stepped in for The Afters Shadows, which isnt a necessarily a negative. Unfortunately, it seems that Cooper failed to learn his lesson after the uncomfortable lyrics on Fight the Furys (his side project) Dominate Me, with the lyrics of Legendary containing lines such as Oh oh oh, oh oh oh, oh oh oh / my heart bleeds adrenaline / the fire I breathe is where I live / say my name, incredible / say my name, an animal. Melodically, the track attempts to retread the bands earlier hits, such as Hero and Rebirthing, but fails to land with the same degree of impact. You Aint Ready is a decent rock piece, with lyrics which are decidedly cliché: Give me your best shot, the stronger I stand / not lookin' for sympathy / what doesn't kill me makes me who I am  you ain't ready for me (no!).

Thankfully, the title track Victorious lands home in traditional Skillet fashion, offering catchy, strong hooks, and perfectly highlighting and integrating drummer Jen Ledgers vocals. The lyrics are good ("Can't change this overnight, though Heaven knows I tried / here I go again / I need a savior now, someone to break me out / who's been the place I've been") and work nicely with the melodies and song structure.

Save Me and Rise Up are both standard Skillet fare, with neither offering being particularly memorable, and both feeling like a retreading of old ground.

"Terrify the Dark is the albums strongest offering, with excellent lyrics pointing back to Skillets roots ("No power on Earth, no power in Hell is gonna steal my peace / ten thousand enemies, they will end up on their knees / when I'm hopeless, I can know this; Youre with me") and boasts an excellent melody. The chorus hits home when Cooper and Ledger sing out Your light will terrify the dark / I call upon the Name that tears the night apart / my doubt will answer to Your scars / and fear will have no place, no hold upon my heart.

Reach is a middling track by every account, but Anchor sees the band branch out a good bit melodically, and it contains acceptable lyrics (Wave after wave, I've been sinking / so unto Your promise I'm clinging / You say that I'm strong / to You I belong, keep holdin' on). Finish Line continues this trend with a punchy opening and lyrics Good evening, my people up in the chandeliers / the wining and dining, the menu is blood, sweat and tears / everybody ready, raining down confetti, tripping into gold right now / ain't about the glamour, click goes the hammer / run when you hear that sound. Unfortunately, the album closer Back to Life is less impressive, and although its style is indicative of the tracks heard on Collide, it lacks charm and feels a little out of place on the album.

As a fan who once loved Skillet, I feel obligated to detail the disappointment felt by the bands recent albums. When examining a band as experienced, popular, and well-funded as Skillet, no punches can be pulled. At this point, the band members seem to be stuck on recreating Comatose, and in doing so, they cheat themselves of their own creative future. The continual content focus on heroes, rising, personal greatness, and overcoming ambiguous obstacles/opposition grows more stagnant with each subsequent release. Victorious isnt a bad album, but it represents so little of what the band could be. Thankfully, there are a few gems here, and if the band focuses on more experimentation and lyrical improvement, I truly believe that it can once more be one of the greats. Until then, this album will certainly satisfy current Panheads, although new listeners would be better off starting a few albums back.

Skillet is back with their tenth album, titled Victorious, and its a fitting name for their best album since Comatose. Truthfully, I have been critical of Skillet for the past few albums, only because I know what they are capable of, and they had seemingly settled for cliche far too often. So let me also give them credit where credit is due; theyve taken some steps forward. There are little moments of experimentation among the familiar Skillet formula--not enough to alienate fans of the last decade, but enough to keep it fresh. Its most clearly seen on the Linkin Park-ish You Aint Ready, (is that light record scratching I hear?!) and on the heavy drums/pop sensibilities of the Imagine Dragon/One Republic influenced This Is The Kingdom, and Finish Line. In addition, it is heard on two of the best ballads they have written since their early days with Terrify The Dark and Anchor. Both are lyrically strong, and melodically interesting.

Though far from lyrically deep, there is a quasi-noticeable step away from the vagueness of the struggle/fight that they had been referencing for a few albums. There is still a propensity to lean heavy on that crutch, ala the opening three tracks, but there is also a better mixture of the specific. There are still some lazy lyrics and ambiguity, but songs like Victorious, This Is The Kingdom, Terrify The Dark, and Anchor are truly among some of the best songs they have written.

This is not necessarily a cohesive album outside of a loose theme of victory, but I dont think they were shooting for an album inasmuch as a collection of strong songs. They didnt nail it perfectly, as it is somewhat of mixed bag, though some listeners may disagree. Theres some filler for sure (Rise Up, Reach, and Never Going Back come to mind), but that can be forgiven as most albums hide it somewhere. Really, there is a sampling of almost every Skillet era aside from the grunge of their debut. If youre looking for symphonic rock jams for exercise; you got them. High quality ballads for worship? Yup. A sampling of experimentation? Sure. In short, there is something here for every Panhead, and they may have just won back an old fan. Now, with a few bigger risks, we just might get the best of their capabilities once again. - Review date: 8/1/19, Josh Balogh of Jesusfreakhideout.com

Whatever fault the average listener may have found with Skillet's last album, 2016's Unleashed, even the staunchest of naysayers would have to admit: it was anything but a mopey affair. To be sure, adjective-laden song titles like "Famous," "Undefeated" and "Feel Invincible" veritably telegraphed its overarching themes of tenacity and self-motivation before the first notes were ever played. This same undergirding inward-focused slant - a rightful stumbling block to many a long-time fan given its relative preponderance - does occasionally rear its head this time around on Victorious. Thankfully, though, the latest record finds front man John Cooper balancing Unleashed's relentless positive self-talk with refreshingly honest looks at his own shortcomings ("Save Me") and insightful glimpses into the nature of true success ("This is the Kingdom"). This lyrical maturity, coupled with the fact that the new project is a good bit less musically repetitive than the last few albums, combine to produce an effort that, while not nearly a return to the glory days of Comatose or Collide, nevertheless finds Cooper and his band mates leaning in the right direction. - 8/2/19 Bert Gangl