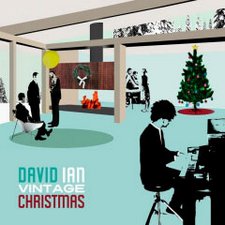 Many times, when an artist decides to record and release a Christmas project, it can be especially exciting for the artist's fans because it gives them anticipations as to how the Christmas spirit will be captured by their signature sound. TobyMac, Hawk Nelson, and David Crowder*Band are all profile examples of this kind of project from this season, specifically. It's most interesting, however, when these sorts of artists extend their sound beyond the norm for these seasonal projects; while Superchick has never elected to release a Christmas album in their history, guitarist Dave Ghazarian, going by the moniker David Ian, has thrown his hat in the ring with Vintage Christmas. It's nothing one would expect from a Superchick member, but that only adds to the fun.

As a member of Church of Rhythm, as well as one-half of the duo from that band (along with Max Hsu) that founded Superchick, David Ian has been in the music scene much longer than some would assume. Being a lead guitarist for most of his musical career, his intuitions toward jazz music have not largely been seen up to this point. But indeed, Vintage Christmas is largely a Christmas jazz album, bringing classic musicians like Vince Guaraldi to mind. With a trio of a piano, drum kit and bass on the forefront, an unmistakably classic vibe resonates through the entire project. "Santa Claus Is Coming To Town," "Silent Night," "I'll Be Home For Christmas," and "The Christmas Waltz" all showcase Ian's instrumental talent of bringing the atmosphere home to the listener. The original "Home For The Holidays" also brings a healthy dose to compositional creativity to the spectrum, resulting in an album that's all Ian's own.

Without completely forsaking plain instrumentation, however, David Ian recruits the vocal talents of Acacia Wulfing (best known as one half of the sister-sister duo Tal & Acacia) and Andre Miguel Mayo for some of Vintage Christmas's selections. Acacia's soothing and sincere voice immediately set the tone with the opening "Have Yourself a Merry Little Christmas," and it only improves with the upbeat "Hark! The Herald Angels Sing" and the favorite "The Christmas Song (Chestnuts Roasting On An Open Fire)." The vocal style only brings to mind 1950's classic Christmas tunes, creating the appropriate mood. While Mayo has been largely unheard before this record, he brings a positively contrasting formal approach to a few tracks, even sharing a duet with Acacia on "Christmastime With You" (while this specific track has two versions on the album, one with Acacia and one without, the duet-less version is actually a bit stronger).

With Acacia and Mayo's appearances on hand, Ian is able to create a smooth sound that ultimately holds up incredibly effectively. If anything's negative here, only two aspects come to mind. First, the album runs a little on the short side. The tracklisting runs its course before one knows it, though the material, brief as it seems, is all excellent. Also, the jazz sound Ian employs, while immensely accomplished and intriguing, does tend to run together with older material after many listens. Sure, very few are still producing projects that sound this way, but because of the usual standbys that Vintage Christmas likens itself toward, the album seems almost too familiar in its inspiration. Still, however, though one cannot replicate the classics with one hundred percent creativity, it does very little to detract from the album's overall timeless value.

In retrospect, a Superchick Christmas album still has its allure for the future, but David Ian's foray into the realm of Christmas music is immensely enjoyable. The song selection is spot-on, the guest vocalists only contribute to Ian's jazz sound, and the arrangements featured are a perfect mix of both familiar and innovative. Vintage Christmas is perfect for any yuletide occasion, and it's a charismatic project for anyone willing to lend their ears. For classic Christmas music lovers, they're in for a real treat.

Christmas music is something near and dear to this music fan's heart. The modern attempts at capturing the Christmas spirit in a different way are often bold, but not consistenly successful in their execution. However, everyone's viewpoint on what kind of music reminds them of Christmas time most is entirely relative. I grew up on the music my grandfather had passed down to my mother, so to me, "vintage" is right up my alley. David Ian composes a wonderful, calm and cool Christian jazz project with Vintage Christmas. As he tends to adhere to the "less is more" rule of thumb rather than go for big, bouncy and boisterous, Vintage is one of the more chill and relaxing holiday projects you may hear this year. The real crowning achievement of this release, however, is Ian having enlisted the talents of Acacia Wulfing, from duo Tal & Acacia, to sing on several of the tracks. Her soft and silky voice is a gorgeous marriage to these seasonal favorites and it fits David's lounge-friendly style like a glove. Andre Miguel Mayo is an inspired addition too, offering a vocal/musical style that brings to mind the likes of Sondre Lerche (specifically his work on the Dan In Real Life soundtrack) and it gives Vintage another dimension. In the end however, Acacia's absence from the rest of the record makes Ian's sparing use of her talents feel like a tease. Vintage Christmas works well as a festive 2011 offering (and is my personal favorite of all of this year's new entries)... I just now would really love to hear David and Acacia craft an entire album like this in the near future. Next year, perhaps? - John DiBiase, 11/7/11