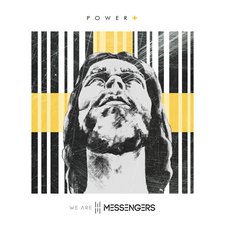 We Are Messengers
Power +


We Are Messengers exploded on the scene a few years back with left-of-center hit songs ("Everything Comes Alive," "Point To You," "Magnify") that both fit in the current Christian music radio world while still offering something fresh with their offbeat rhythms and melodies. Lead "messenger" Darren Mulligan's distinct baritone Irish brogue is a powerful force in its own right, and the band's new full-length follow up to their eponymous debut album (with a fine set of EPs in between), Power, is aptly named.

Leading off with a title track that is an encouraging mix of a swinging sports anthem (which would sound great played before a basketball game) and personal exhortation to the believer, the album shows that upbeat doesn't have to mean shallow. The following song, the unfortunately-pedestrian-titled "Love," moves to a handclapped beat and jaunty electric piano line and grooves just right. Third number "Never Change Your Mind" is a celebratory hymn to God's unfailing love that makes good use of choir-like backing vocals and echoing atmospherics that conjure up a cathedral setting.

Hit single "Maybe It's Ok" has been around for a bit now (it's a holdover from the band's last EP) and is perhaps one of the best songs in regular rotation on Christian radio, featuring a slow-burn melody that sneaks up on the listener. With a dash of Coldplay, and a bit of Mumford & Sons, "Maybe It's Ok" is an honest song of both worship and personal defeat, "If I didn't know what it looks like to be dirty / Then I wouldn't know what it feels like to be clean / And if all of my shame hadn't drove me to hide in the shadows / Then I wouldn't know the beauty of being free / Maybe it's ok if I'm not ok / Cause the One who holds the world is holding onto me." A song of lament on Christian radio is a rare beast, and should be celebrated.

"Home" (another slightly-boring title) features a nice bit of haunting traditional Irish instrumentation (violins, uilleann pipes) and shows a direction that the band should explore a bit more. "I Need To Feel It" and "Knock Me Down" rock out nicely, while quiet closers "Always You" and "Come See (Glory Hallelujah)" end the album on a mellow, contemplative note.

The album re-release, deluxe or anniversary edition has been used by the music industry for many years now to get a little more exposure for a worthy project, or if your view is cynical, a few more units moved. There are usually a few bonus tracks, remixes or other fan-service bits of material for fans of the artist to sink their teeth into while waiting for the next album to come along.

In the case of We Are Messengers, the deluxe version of their fine release Power (titled Power +), from earlier this year, includes just one new track, Image Of God -- an honest attempt to wrestle with the civil rights issues of the present day, and bring it all back to the grand and Biblical idea that all humans, every race, is created in the image of God. The song rises and falls in epic fashion, and comes off as an honest response to the evening news.

Its slightly odd to re-release an album that only came out a few months ago, especially with just one additional song, but Image Of God is a worthy listen, and a worthy addition to the band's catalog of songs.

We Are Messengers has a unique perspective lyrically on faith, and mix it up convincingly on a musical level with Power +. Only a few tacked-on remixes at the end, and a short overall running length keep this album from a higher rating.