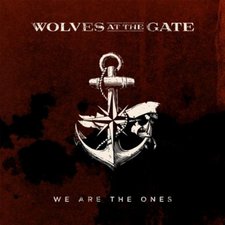 Wolves At The Gate
We Are the Ones EP

Solid State brings the next band to add to their remarkable lineup, Wolves at the Gate. WatG are based in Cedarville, Ohio and provide an interesting debut EP album this year (it was originally an independent release) in We Are The Ones. While some may argue that this band is not hardcore enough to be released on Solid State due to some of the clean vocals sung by Steve Cobucci, the band's music provides enough intensity and harsh vocals from Colin Jones to make the band worthy enough to deserve this placement. The band does quite well at delivering passionate thought-provoking lyrics that are referenced by books such as Psalms, II Corinthians, and Acts.

After playing this album multiple times, I admire WatG for making each song easily distinguishable, as well as captivating the listener with a surprise collision of music when it seemed like the songs were about to come to a close. For example, in the song "Herald," it sounds as if the song is about to cycle down and then, suddenly, an entire change in rhythm morphs the song into a completely new circumstance with the composition becoming even more energized due in part to the blazing speed and guitar skills of Jeremy Steckel.

Wolves at the Gate provides some of the most unique experiences that any diehard metal fan would want. The band tends to avoid constant repetition in choruses, as the songs tend to focus more in a story-like manner, lyrically. The vocals in WatG are well-balanced between Cobucci and Jones who both add much diversity to the atmosphere of each track. The subject matter of the album, at times, will focus on one's walk with Christ and how important it is that we not rely on the resources of this earth and that God should be the focus of one's life. The album also covers issues regarding patience, developing strength, and understanding that things do not come in our time. One example is in the song "Vapors," "so you've got the world / gripping your life in your hands / taking for granted the breath in your lungs / but death has a voice / singing to us 'make your stand!'" "Herald" is one of the highlights on the EP, and the song focuses on remaining loyal and having a faith that continues to be strong despite the attractions of the world that continually linger and entice. The album never lets down with the remaining songs: "Tonight My Son," "No Rival" and "Oh The Depths." The EP also contains two acoustic versions of the songs "Heralds" and "No Rival," which are a nice addition and were not previously released on the independent version that was released in January of 2011.

Typically, EPs are circulated as somewhat of a sampling of songs before a full album is promoted. Even though it only has five full songs along with two bonus acoustic versions, We are the Ones is an exceptional release that is filled with talent that will easily satisfy the hardcore / metal fans that like to have a sound that provides both harsh and clean vocals equally as well as fans of retired bands such as Haste the Day and Cry of the Afflicted. Wolves at the Gate have successfully provided a very memorable experience with only five songs and I can only anticipate that the next album will be even better.