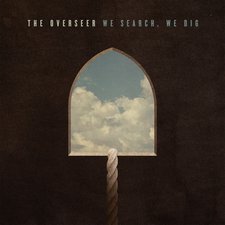 The Overseer
We Search, We Dig

Solid State has taken possession of a "New Breed," cultivated in the Arkansas soil, and raised up seemingly out of the notice of almost everyone until two years ago. The Overseer steers about with words like "passion" and "work ethic." Forgive me but, it is difficult in this day of the music industry to find any originality in these washed out virtues. So I can say with absolute certainty that every band that claims these words and does not give their absolute ALL to the music needs to apologize to The Overseer, because their credit is due. Don't believe me? The quartet's debut album, We Search, We Dig will change your mind.

When I first saw the album clocking in at thirty minutes, I was disappointed. Legitimately, because I wish there was more. Right away, on tracks like "Secrets" and "Amend," the sweeping, melodic, riff laden storm brings Underoath to mind. But it's funny; I can't put my finger on the similarity. The technicality is fluid, dynamic, and hair-raising. Abishai Collingsworth's drumming is refreshingly creative without taking the spotlight; spot-on timing, and in perfect accord with the intertwining guitars.

Their musicality is especially impressive when considering that Darren King is their only guitarist, which means that bassist Bradley Riggs often lays down the chords while King decorates them. The layers of melody are remarkable for four band members to say the least. But the diversity from song to song is even more commendable. The Underoath gray-tones blast through like dynamite, but in several tracks ("Dredge," "Estrange" and more), Thrice influences poke out their heads. Clean vocals, haunting or soothing, are backed by a solid downgrade of their heaviness in the other tracks, often building to soaring, anthemic choruses.

I may be slightly radical in saying that they have accomplished what To Speak of Wolves attempted in their Solid State debut. The Overseer is the new Underoath. The "New Breed"? Let's talk about passion; with vocalist Anthony Rivera screaming his lungs out through your speakers, it is possibly impossible to deny the dedication of these four boys. Every now and again, a team of musicians comes together that really love each other, and that live for the sound and the message. When they weren't writing their debut, 400 days of their past two years were spent on the road, spreading their beliefs to a fan base that they had to build up from scratch.

With We Search, We Dig, the band emphasizes through the lenses of their own experience what it means to seek out a purpose for oneself, no matter the cost. "Searching for hope, digging for truth and going through trials full of highs and lows," explains Rivera. "That is a theme of the whole record, not just that [title] track in particular" The band means to transcend the idea of "living in the moment." Ignoring the latest musical trends, disregarding the chance to cash in, they write with full honesty the music that they truly want to write. I can't tell you how much that means to me personally, and what a beautiful sore thumb it makes in the sea of phony dribble pervading the airwaves.

If they continue on this path, The Overseer have a bright future ahead of them, a future that will perhaps bring the gradual descent of Solid State Records to its upward cusp once again, and maybe ignite a little change in the music industry as well.