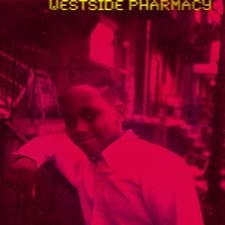 Japhia Life (pronounced Jah-fye-ah) has been putting out music and mixtapes on his own now for almost thirteen years and has gone widely unnoticed. Those in the underground know Japhia and hail his first mixtape, Pages of Life: Chapter One, as a classic often compared to Illmatic from Nas. With his newest release, Westside Pharmacy, Japhia finds himself ready to be discovered by the masses. He's a Christian and doesn't hide from his beliefs (Japhia states "I saw the light when I was 17, man, that's the flyest thing I've ever seen. I've been a Christian in Christian Dior, ducking the triple six in Seven jeans" in "Lifey's Revenge"), but isn't looking to be called a "Christian rapper" or even to be closely associated with CHH.

If you're not familiar with Japhia, he brings a slightly retro sound (90s era hip-hop) similar to that of Nas or Common. The record features fifteen songs (plus three interludes/skits). The beats don't necessarily hit hard, but the album is musically deep. Couple an excellent sound with outstanding lyrics and flow and you may wonder why Japhia wasn't recognized earlier in his career. The lyrics focus on real life issues like drugs and street violence while others are an honest look in the mirror, like "Last Night" and "I'm a Mess," as Japhia admits, "I'm a mess right now; tryin' to do right, but goin' left right now." No matter the message, Japhia always claims God as the reason he made it, and continues to make it, through his problems. Another interesting track in theme is "Letter to Lindsay," which starts with a news clip discussing Lindsay Lohan's May 2007 arrest for DUI and cocaine possession. Japhia tells Lindsay that he did a lot of things he viewed as unforgivable in his younger days, including drug use and being arrested, but offers to talk to her about real love. Despite the serious nature of the album, Japhia finds time to show his sense of humor in the skit "Phone Call." In the skit, Reverend Tithes calls the studio asking for "Jafee" in order to complain that he is taking members away from his church. It's a funny moment in the record and is almost necessary to break the serious nature of the record up a bit.

The stand out tracks on the album would have to be "Last Night," I'm a Mess," "Cold Blooded," "Cloud" and the more lighthearted "The Exercise" -- which is "dedicated to my future wife." For those that have never heard of Japhia Life, Westside Pharmacy is a good starting place before diving into his older material. Japhia's latest effort is without a doubt a solid album from a talented individual, but it's not likely to be considered a classic like Pages of Life by his fans. Westside Pharmacy probably won't be thought of as "hip-hop album of the year" either, but it should be discussed amongst this year's best. Don't pass on this relatively unknown artist; he easily could be a household name very soon.