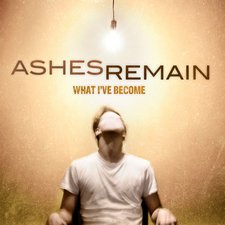 Newly founded Fair Trade Services, spawning from the INO Records portion of Integrity Media, is home to modern rock act Ashes Remain. Their national debut album, What I've Become, is the newest entrance into an arena that can be considered "radio rock." These guys fit in perfectly with bands such as Kutless, Jonah 33, or Red; in fact, much of the album sounds like it could be from a new Kutless release.

The album starts out with a little edge, along the lines of Red, on the track "Keep Me Breathing." From there, the album quickly takes a turn towards Kutless. The lead single and third track, "Everything Good," isn't a dead ringer, but it sounds very similar to Kutless' version of "Word of God Speak." One of the top tracks on the album is the piano driven "Without You;" this is one of the few tracks Ashes Remain has to offer that actually make them stand out a bit. Although it is far from original in sound, "Take It Away" is an extremely catchy song and is also one of the best on the album.

Lyrically, the album is pretty spiritual. According to the group's bio on the label's website, much of their debut was written from the perspective of what it is like to feel as if there is no hope, where you are your own worst enemy and ultimately what it looks like to go from that very real and dark place to one where there is hope and step into the light. That journey from dark to light isn't always a swift one and sometimes has to be walked many times, but it is a journey that the band is familiar with and feels called to go on with their fans. As lead vocalist Josh Smith puts it, "We're not role models. We're just broken people who need Jesus."

The major detractor of the album, however, is in the music. What I've Become is very generic and unoriginal in sound. To their credit, Ashes Remain are completely comfortable in their own skin. This is a band that knows their sound and they stick to it; this alone puts them ahead of bands like Since October who can't seem to find a definite sound for themselves. The other issue that arises is that the recordings could benefit from another guitar track or two layered on. At times, the tracks seem like they are meant to be a little heavier, but it doesn't come across as such in the recording.

If you are a fan of the everyday average modern rock played in constant rotation on radio stations these days, Ashes Remain are right up your alley. They bring just enough on the side of catchy hooks with What I've Become to be interesting. If you are looking for something new and exciting, you should probably stay far away. Given the state of affairs in the music industry today, I can see Ashes Remain having some success with their accessible sound. Though their debut isn't particularly impressive, they do show enough chops in the style they play to be a band to look at in the future. Hopefully these guys can add some originality and creativity into their fairly polished sound.