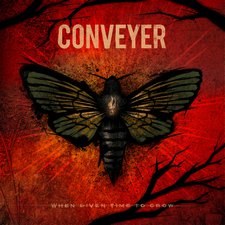 Conveyer
When Given Time To Grow


After releasing only a couple of mini-EPs in the independent market, Minnesota-based hardcore outfit Conveyer was picked up by the mainstream punk and hardcore label Victory Records. Without missing a beat, Conveyer recorded their national debut, When Given Time To Grow, which fits perfectly alongside other albums Victory has released in the past.

When Given Time To Grow starts off fast with "Shining," and seems to just keep moving fast until "Impatience" rolls around, with a few brief pit stops in songs like "Cage." Boasting a sound like that of a modern and/or more polished Stretch Arm Strong, you can expect lots of high-tempo power chords and blistering drums. Thankfully, though, Conveyer manages to incorporate a healthy dose of melody into the fray. There's actually a lead guitar present, which is used for more than just adding another layer of rhythm. We even get a small taste of a breakdown in "Resist, Admit." Thematically, there's a lot of time spent talking about forgiveness, as well as thankfulness to others who have benefitted the lead singer's life in some way or another. Even though Victory isn't a predominantly Christian label, it's nice to see that they sign Christian artists and don't discourage them from being open about their faith.

2015's Christian heavy music scene has been somewhat bleak, with only a small handful of strong releases. Conveyer's major label debut doesn't produce a lot of talking points, but it does serve as one of the better releases in the genre this year. The highlights of the album come in the form of "Ruined" and "Blister," so if you're on the fence about giving this a chance, listen to those songs and see how you feel.