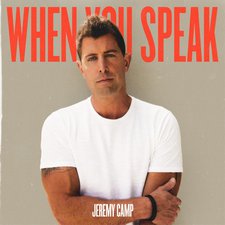 Jeremy Camp
When You Speak


One of Christian Pop's most recognizable voices, Jeremy Camp, has been on a roll over the past decade, producing five studio albums since 2013. After his success with The Story's Not Over in 2019, Camp is back with a thirteen-song outing, titled When You Speak. However, quantity is not always ideal, especially when it takes away from quality. Unfortunately, this is the case with Jeremy's latest release, as it follows a familiar formula from start to finish.

Things kick off with "Can't Take Away," a catchy anthem that has Camp singing "I hold onto the promise He won't break / Cause what the Lord gives / The world can't take away." It has similarities to "Dead Man Walking," and is one of the stronger numbers on this endeavour. The title track draws comparisons to "Christ In Me," from I Will Follow, and is a solid addition. He focuses on the importance of listening to God's voice, as it brings peace to his soul "When You speak / I'm found in the sound of peace, be still / The wind and the waves bow to Your will / You drown my fear with a love more real."

What makes this project fall short is its lack of diversity. While Camp has strictly been a pop artist the last several years, albums such as I Will Follow and The Answer still showed some level of variety and creativity. The Story's Not Over was a step down, but traits of Camp's strengths were still visible. Disappointingly, this record fails to bring anything new or memorable to the table, sinking further into the pit of mediocrity and repetitiveness.

As the track list continues, each and every song seems to follow an identical style, and nothing is said that hasn't been said before. Tunes like "You See Me," "One Desire," "What Love Has Done," etc. sound contrived and uninspired both musically and lyrically. It is frustrating to see someone like Camp, who has shown so much potential in his lengthy career, to produce such cliche, and quite frankly, unoriginal content. We know he is fully capable of creating high quality music in the CCM industry, but with every release, there is less and less growth - almost as if he is running out of ideas.

Now, there are few in the business who have a heart for the Lord the way Jeremy Camp does. He has never once wavered in his faith, and continues to encourage millions of people through his music; and many will be touched by the songs on this record. With that being said, Camp does not carry the same energy or creativity that he used to with his work, leaving the listener wanting something more. Unless you are an avid fan of Jeremy, this album is simply not worth the time.