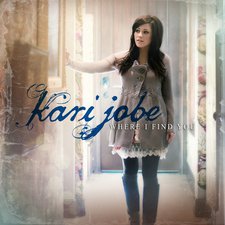 Kari Jobe
Where I Find You

Nearly three years have passed since Kari Jobe's Integrity debut brought her national attention, yet the Texas worship leader's background extends well beyond new artist status. Since 2003, she has led music for thousands at Gateway Church and, with the rest of their team, has contributed to over a dozen releases under the name Gateway Worship. Her debut was met with high acclaim, pronounced by reviewers a pleasant and earthy take on the genre. With so many accomplishments to her credit, Jobe is essentially a veteran artist, and her second solo effort, Where I Find You, is sure to be a welcome follow up, though with a new label and a bigger sound than before, it's a whole different venture.

Kari Jobe's natural fit in the CCM landscape is congregational songs destined for Sunday morning set lists, but pop enough to play alongside the most beloved radio stars. While her debut often worked with piano-based ballads and a sweet, restrained approach, Where I Find You plunges straight into the arena-filling sound of artists like Chris Tomlin and Hillsong. Piano and keys still figure greatly into her work, with guitars, strings, and big drums to amplify the emotion. Lyrically, these tracks showcase singable hooks that stick in the mind and cover a variety of themes, from looking to God in adversity and the role of the Church, to proclamations of God's holiness, mercy, and unchanging nature. A few songs take on a personal angle, but these too keep the focus vertical and the mood reverent.

Where I Find You has its standout moments, beginning with "Steady My Heart." Classical strings lead the way with a question ("Wish it could be easy / Why is life so messy? / Why is pain a part of us?") then gives way to a bright, hooky chorus that answers, "Even when it hurts / Even when it's hard / Even when it all just falls apart / I will run to you." The lead single "We Are" shifts the focus to the body of believers with a memorable hook that compels to sing along. "Find You On My Knees" recalls Meredith Andrews a bit as a song that's somewhere between introspective pop and praise chorus, and showcases the hidden power in Jobe's voice.

Throughout the album's anthemic choruses abound, such as the upbeat "Savior's Here" and its closing refrain, "Love that never fails / Arms that never close / Blood that covers sin / Grace that never ends." But Kari Jobe is at her best when it's just her and an acoustic ballad. "Here" ends the record with a haunting, classically rooted piano melody and tender singing imploring the listener to come find rest and healing in Christ. Though the almost six-minute track seems restrained compared to others, it's a powerful close that recalls the simplicity and beauty that made her version of "Revelation Song" such a favorite.

Overall, this is a well made, passionately delivered project and is sure to provide a few new additions to many a church leader's songbook. Still, it's worth noting that some of these songs, like the staples of most worship albums, are meant for the live experience. With the exception of a few tracks, the bulk of the record carries a highly produced "worship sound," and some of the bigger, longer tracks can get repetitious after a while. This is the dilemma pointed out by many critics of the genre, and it's a bit disappointing to have that "heard it before" feeling, especially considering the beauty of her more restrained pieces or the fun of her pop radio single.

Despite that caveat, fans of artists like Darlene Zschech, Chris Tomlin, and the different incarnations of Hillsong should find a lot to love about Kari Jobe's newest work. Her passion and ability to lead listeners into worship are undeniable, and many of these tracks would fit right in with their style. Those looking for a pop album won't find it here, but it should provide a few new songs to learn for Sunday mornings.