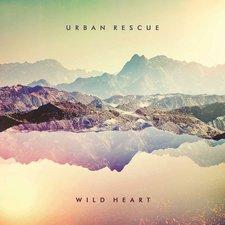 
This summer, the term "superhero movie fatigue" is being bandied about by those who talk about movies, be they professional movie critics or arm chair reviewers, to talk about that theoretical moment when mass audiences will finally tune out and stop going to superhero movies en mass. With wave after wave of these films hitting the multiplexes each summer, will there be a sea-change moment when audiences move on to the next kind of film because of a hyped, yet sub-par and overly-familiar movie?

The California based Urban Rescue, the first signee on Rend Collective's new "Rend Family Records," might represent a test case for "worship music fatigue" in the Christian Music world. Their first full-length major label release, Wild Heart is an interesting case study on where the general direction of the genre of worship music is heading, and what audiences will go along with before demanding something else.

That's not to say that Wild Heart is a sub-par album by any means, it's just that most of the album sounds like what worship music circa 2016 is expected to sound like. It contains many good moments of honest and well-crafted songwriting, it's just that there is an unfortunate "sameness" to much of the music in its sonic blueprint and songwriting structures. The nice moments are plentiful throughout the beginning of the album. With hints of Britpop artists like Keane, Coldplay, Bastille and Snow Patrol, "Alive In You" starts off the album with a nice gang vocal and a pleasant melody that ebbs and flows with intensity. Second song "Never Stop" features a neat, swirly keyboard line and a bouncy beat, and the third song and title track has a nifty synthesizer and vocal melody entwining throughout the track. The album's best moment, "Song Of My Father," is a slow-builder that features the album's best lyrical turn, spinning a cool reverse-image of God The Father singing to His people, "I hear your melody / I hear your symphony / there is nothing louder than the song of my father."

Wild Heart needs a lot more of the creative juices that birthed "Song Of My Father;" the rest of the album is a bit of a "paint-by-numbers" affair until "Kaleidoscope" mixes up the flow with its dancy beat. Ending number "Up From The Ashes," with its spoken word / rapped interludes, is an interesting mash-up of styles, and it mostly works well.

With some nice individual moments of creativity alongside a few more dull ones, Wild Heart shows Urban Rescue is a band that has it in them to create a truly unique work of praise the next few times around, worthy of the song that the Lord is singing to His people.