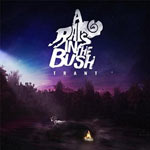 Trant
A Ram in the Bush

When I see a hip hop record that has artists such as Dre Murray and Braille, I am determined to check it out, and this is why Trant's A Ram in the Bush appealed to me. Though I had never heard of Trant before, I wanted to give this a few spins at the very least. From a musical perspective, Trant plays the role of DJ, producer and songwriter, and wants to deliver uplifting hip hop with a multitude of different rappers at his side, and that's exactly what happens on A Ram in the Bush.

"Say That" solidly features Dee-1 and Yaves on a track with a unique blend of reggae and guitars making a solid rap tune. "No Choice" stands out on a deep level of finding hope while showcasing the superb talents of Dre Murray, Corey Paul, and Tony Tillman. The rest of the album has solid collaboration and ranges musically from OG west coast rap to laid-back chill tunes. If you're into the underground hip hop scene or you prefer any of the featured artists, this is worth checking out. I'll be spinning its uplifting tunes and praiseworthy components this summer for sure.