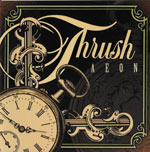 Tooth & Nail Records had a lot of bands that go largely unappreciated by Christian rock fans these days. Craig's Brother and Too Bad Eugene are two good examples of this. Coincidentally, these two bands shared some band members: Adam Nigh and Andy Synder. Shortly after Too Bad Eugene went on hiatus, Nigh and Snyder got together with some other friends (including Russ Skelton of Next In Line) to form a band called Thrush. They don't have much to their name outside of a few demos on MySpace, but they do have a four-song EP called Aeon.

Craig's Brother and Too Bad Eugene were very pop punk-oriented, with the former having more of an edge than the latter. The heavier aspects seemed to have carried over more into Thrush's sound, bringing something of a punk-influenced rock sound. "Rise and Fall" does sound a lot like what you'd expect from these bands, with maybe even a little Slick Shoes influence as well. "Nashville" is a little weaker, bringing a Kutless-ish modern rock feel, but "Suttee" comes in to bring things back up. "Suttee" is perhaps the EP's strongest track; with an undeniably great rhythm and solid guitar work, it also bears the most resemblance to Craig's Brother. The last of the four songs is "Down With You," which again is more rock-based and has some higher-pitched guitars in the loud, near-epic chorus.

Again, Thrush didn't do a lot in the music industry, but this EP is a testament to how good they were and would've been had they gotten a chance to record a couple more albums. They would've made an excellent addition to Tooth & Nail's roster at the time. Had I discovered this EP in 2006 when it was released, it may not have left my CD player for a while, as I waited for their next album to come out. As far as I know, there's only one place you can get it right now, and that's on Indie Vision Music's Bandcamp, where it just so happens to be pay-what-you-want right now. I'd recommend getting on it as soon as you can.