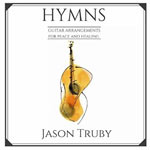 When you think of guitar virtuosos (I mean true masters), there aren't really too many deserving of such a title. When you narrow that down to the Christian community of artists, only one name really comes to mind: Phil Keaggy. The guy is an absolutely phenomenal guitar player and, to this day, has massive amount of respect amongst guitar players and other musicians alike. While many metal guitarists are certainly known for their chops, why is a term like virtuoso being thrown around on a review for the newest album by former Living Sacrifice and P.O.D. guitarist Jason Truby? Truby has silently been releasing acoustic instrumental albums for years, starting with 2005's String Theory, and man is he good! His newest album, Hymns: Guitar Arrangements For Peace and Healing, is another example of his true musicianship.

Hymns features ten classic hymns, eight of which are still wildly popular within the church today, put to beautiful acoustic guitar arrangements and backed with various accompanying instruments for certain tracks. The music here is not indicative of his metal days, so don't be expecting a shred-fest, but instead a masterful display of acoustic guitar playing arguably more impressive than anything he could have done back in his Living Sacrifice days. The intricacies that stand out on songs like "O God Our Help in Ages Past," an album favorite, are enough to make you smile. Even a song like "Amazing Grace," done a million different ways by just as many artists and musicians, manages to sound a little more fresh than usual. "Be Thou My Vision" is another one that sticks out in the track listing as a really striking version of the song. While hymns albums in general are a dangerous game -- there is a super thin line between ruining a classic and recording the same thing that's already been heard countless times before -- nothing on Jason Truby's Hymns makes you think, "I've heard this all before." Truby gives listeners the foundation they need to recognize the song, but then adds so much extra beyond the standard melody without it becoming a distraction. In fact, it's a very welcomed addition to songs heard so many times with the same arrangement. The best example of this is "Doxology." The main music is complex and lovely, but it sounds nothing like the "Doxology" you've heard. Suddenly, a simply picked guitar cuts through the mix playing the known melody of the song and it all comes together.

Hymns: Guitar Arrangements For Peace and Healing isn't necessarily going to be your everyday listen -- unless your everyday music consists of softly picked acoustic guitar instrumentals -- but instead, gives you absolutely wonderful renditions of classic hymns to play in moments of reflection, or as the album title suggests, in moments when you need a little peace or healing in your life. These cuts are also perfect for churches that don't have a lot in the way of musicians. The tracks would be great for playing during invitations, as background music during communion, or in other moments when softly played music would be fitting. Is Jason Truby as good as Phil Keaggy? Who knows? Is his music on par with some of the acoustic albums Keaggy has released over the years? No doubt. If you haven't listened to Truby's solo music before, now is the time. I personally feel that he is one of the most underrated and overlooked guitarists (amongst the general masses) in the music industry today. Truby truly delivers here and proves that he is a master of his instrument. If you give these stunningly played acoustic guitar songs a listen today, I seriously doubt you will find yourself disappointed.