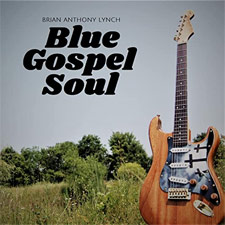 
Brian Anthony Lynch is an independent musician who has been playing music for 20 years. Lynch released his debut album, Flicker in the Dust, last year and followed that up with an EP. His newest album is a gospel blues album entitled Blue Gospel Soul. The pieces of a good album are here, but something is off in the production. None of the instrumentation feels properly aligned. The drums don't match up with the rhythm guitar, which doesn't always match up with the keys, etc. However, the vocals are always lined up with the rhythm guitar. When you focus in on a single instrument, the talent can be found. There are some nice guitar licks throughout, and the acoustic guitar typically keeps a solid rhythm -- however, it often sounds out of tune. Lynch doesn't consider himself to be a strong vocalist, but on this album, his voice actually works well for the musical style and sounds stronger than on his previous albums. The strongest efforts here are blues number "Awesome Power of Love" and the acoustic driven "Love So Closely." The timing issues -- especially on the latter track -- are much less prevalent and the listening experience is more pleasing. Blue Gospel Soul is the result of a musician with a passion for writing songs that praise the name of God. You won't find the best productions or recordings here, but Brian Anthony Lynch is serving and praising the Lord in the way he knows how. It takes a lot to put your music out there for people and critics to hear, so kudos to Lynch for being willing to praise his Savior in such an open way.
- Review date: 1/21/22, written by Michael Weaver of Jesusfreakhideout.com 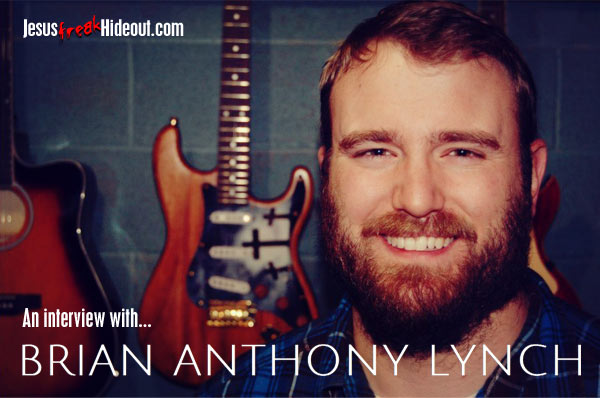 Brian Anthony Lynch: The first instrument I ever learned was piano, but I never practiced it as much as I should have. It did help give me a visual for the notes, and a basis for understanding music theory. In school I played trumpet, then switched to trombone after a couple years because the band didn't have enough trombones. Outside of that, I play mandolin, but I admit I have to keep a chord chart handy when doing so. I play ukulele with my kids. I started playing harmonica last year. I also had to learn drums for recording but don't consider myself a drummer. The guitar for me is home as far as music goes.

Brian: It means a great deal for me. For years I struggled trying to melt together the type of music I loved playing with my faith. I started out playing in Church when I first learned to play, then I played in several bands all within the rock genre, but secular music. I loved playing the guitar parts in rock songs, but didn't necessarily care for the topics in the lyrics. I liked the lyrics in the songs from church, but it stylistically was not what I enjoyed playing on guitar. I wasn't exposed to much contemporary Christian music in those days, so in my lack of innovation, I never considered it a viable option.

The idea to do Christian music first started coming to me when I met my wife. I was finishing up college and we started raising a family and didn't do anything with music for several years. My wife and her mom listened to Christian music, and as far as modern music goes, I was finding more and more the best music is Christian music. A few years ago she got me a Third Day album for a present, and when I listened to it, it finally clicked. I could play the guitar the way I play it and still glorify the Lord. I had several guitar pieces I had written with no words. So I focused on my faith and family when writing the lyrics, and that is where a lot of this album comes from. I feel a sense of wholeness with this album, I had to give myself more fully to God, give the guitar parts to Him, and write words as prayer to Him to go with the music.

Brian: My inspiration started with my dad's music collection which was a lot of Eric Clapton and CCR. He got a Beatles 1 album around the time I started playing guitar, so those three acts were my biggest early inspirations. There are all kinds of 70s and 80s rock bands I could list, but I will say, I played the guitar in a very standard way until I finally dove in and learned Jimi Hendrix songs. It completely changed the way I approached rhythm guitar. I love the classic Chicago Blues era of guitar, and my favorite is probably Buddy Guy. Buddy Guy is the only guitar hero of mine I have ever seen play live. This album in particular is heavily blues-rock influenced, I wanted it to be stylistically cohesive in this way. I don't always stick to this style though, Pink Floyd is another huge influence on me. I recorded an album called Retrospectrum for a studio project called Blue Hand Grit in 2020. It is a Christian Concept album where the Pink Floyd influence is more apparent. I hope to do another Christian concept album in the future with a more blues-country-western vibe to it.

Brian: "Love So Closely" almost got cut from this album, because it is stylistically a bit different than the others. The song is essentially about a person who is so busy, they are missing the quality time with their family. I originally wrote it as a piece of fiction around 2009 or so, before I had a family. I was so busy at the time, I had to work 2 jobs while doing clinical training at a hospital and still take classes at college. I thought about hard it would be for someone to have a family and be that busy. The song was almost a premonition. When I started grad school I was again very busy, only I had a wife now, so the song was starting to become a reality, I never felt like there was enough time together. We then had our son, and I would play guitar for him in his crib. I played that song once while he was falling asleep and realized the song was just as much about him as is it was for my wife, and I wrote it before meeting either of them. That song has since kept me in check, to always make sure I put my family first, and make sure they get best of me. That's what it is meant to inspire, to sometimes drop everything that is going on in the world and just be part of your family.

Brian: "If You'll Hear Me" is the one that means something extra for me. It's about my dad. He and my mom split several years ago. That was devastating. My dad and I had gotten close prior to their split, we were doing trim work at my home. We had actually had a lot of deep conversations about faith at that time. A couple months after we wrapped up remodeling is when they told me they were getting a divorce. In the years following, he stopped going to Church routinely, just wasn't doing things the way he taught us growing up. So I just wanted to pray for him and that's what this song is. The guitar part too I wrote for him, it was a part I wrote for him hoping he would enjoy it. Last year my dad got cancer in his tongue. This song was already recorded before that. There is a biblical inspired line in the song "help him to confess with his tongue." I didn't know what to think when he first told me the diagnosis and knowing this song was in the song. Being that the song is a prayer, I never changed the line. He underwent the surgery, had half his tongue replaced with leg muscle and he underwent radiation. He is doing well and speaking fine. He also ended up with prostate cancer, but they feel this will be treatable and has not spread. So please pray for my dad and all the dads out there that did the best they could with what they had that they always grow in faith and closer to the Heavenly Father.

Brian: It does have a deeper meaning, for me, Blue Gospel Soul is penitential feeling, or contrition. Being a Catholic Christian, a big part of my faith life is my examination of conscience that I do routinely in preparation for confession. I look at my life, I see where I am doing good and try to grow further, but also where I messed up and need Christ's forgiveness. "Work out your salvation with fear and trembling" as St Paul put it. The Blue Gospel Soul feeling is when I know what the gospel says, and I know I failed, but I know Christ continues to extend mercy to me. In confession Christ uses the priest to give me that mercy. Waiting to get that absolution, is a huge reality check, and it makes me think about His sacrifice on the cross in a very real way. After absolution, I then have the knowledge of the forgiveness I have been given, generally I feel like huge weight is lifted off me, or a knot has been taken out of my stomach at that point, but I do my best to retain that contrition, in hopes that with His help I won't sin again. I go back to the world and try to make it a better place, but with a reminder that my God had to give up his life for the forgiveness of my sins. I know not all Christians practice their faith in this way using sacraments, but the process of examining our conscience in order to grow in our faith and live holier lives I feel is practice that all Christians can appreciate.

Brian: I feel God has been teaching me to be thankful. This has been a hard year for many. Most of us wonder when will the pandemic end. Just as things seem to get better, we know someone else who gets sick, or someone else who passes away. I was 33 years old over this last year. I work in health care, and spent the year trying to help and teach my patient's what to do to be healthy, some listen, and some don't. At times I have been very frustrated, but then I think of another 33 year old man two thousand years ago who walked around his homeland, healing people and trying to teach them what they needed to live (and live eternally) Some listened, and many didn't. He ended up being crucified. Well as bad as some of my days may seem, I go home to a loving family every night with a roof and food. So God has continuously taught me to be thankful this last year. Thankful for my job, that I haven't been killed in this pandemic, that my wife and kids has been healthy. He taught me, that at times the crosses we bear can be heavy, but He already bore the cross that saves humanity. I recorded these songs as a way to say thanks, and to help escape the stresses of this trying time. The Lord gives, and the Lord takes away, but there are better times ahead in one way or another for those who love the Lord. I'm just thankful I can still do all the things I've been doing.