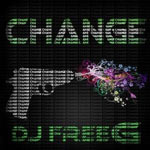 Making his debut in the American music scene, German native DJ FreeG is here with his dance/hip hop album Change. The music of Change is techno and trance music that would fit pretty well within the confines of a dance club. There are lots of grooves, samples and plenty of the obligatory bass-snare-bass-snare most commonly associated with the genre. Most of the tracks do pretty well as far as creating good techno tracks, but I think Change would have been a better album without the vocals. Not all the tracks have vocals, and it's not like a traditionally-structured song with verses and hooks. But some of the songs do seem to be centered around one idea. Other songs just have one phrase that keeps getting repeated at various points throughout the song (like the title track, which has two sets of vocals). It's clear that, as far as style of vocals, there are definitely cultural differences between American music and German music. And because of this, it seems like DJ FreeG's music has had a bit of a rough time making a smooth transition into the States' music scene. The vocals seem a little corny, especially the weird rapping in "Crazy Crowd." It just doesn't work too well. Without the vocals, Change still wouldn't be a great album, but it would fair much better. The music is decent in some tracks, and good in others, but overall nothing really stands out or makes me want to listen again. The instrumental parts would work really well as background music, but with the vocals included, you'd have to already be in the mood to dance in order to really enjoy Change.