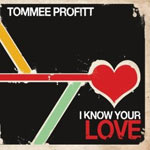 Tommee Profitt
I Know Your Love

Having shared the stage with heavyweights like TobyMac and Family Force 5, young worship leader Tommee Profitt has had a good amount of exposure, despite being an independent artist. The first day of 2011 marked the release of his fourth independently-produced and -released worship album, I Know Your Love. It's got a lot of power pop, and a lot of anthemic worship tunes that will instantly grab the ears of many fans of the modern worship music scene. "This Is Your Day" and "Nothing Else Matters" are on the same playing field as Hillsong, bearing almost the same sound, as do the majority of these songs. Along with Hillsong-style worship, it's also clear that Profitt draws his music's inspiration from other sources as well, such as SONICFLOOd ("Covered" and "Even When") and David Crowder*Band ("Let It Be You" and "One True God"). He keeps a good mix of styles interwoven into I Know Your Love, which keeps the album interesting at times. It even gets slightly weird sometimes, like the strange structure of "Unstoppable" and the middle eastern feel of "Marahti Prayer." The diversity of the album works well for Profitt. Unfortunately, it doesn't feel like Profitt is taking complete ownership of the sounds he's producing. The sound of every song can be traced back to someone else who did it first, whether it's Hillsong, Crowder or even Owl City on a few occasions (mostly vocally, but musically every once in a great while). So while he maintains good diversity, he lacks a considerable amount of creativity (which is rather disappointing, considering that his bio states that he "brings a lot of uniqueness to the table"). Uniqueness, no. Talent, yes. Nothing about I Know Your Love is mind-blowing or especially captivating, but Profitt proves himself to be a good musician. Those who listen to a lot of worship music will want to pick this one up for sure.

This text will be replaced by the flash music player.