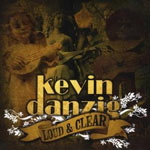 Acoustic rock singer Kevin Danzig has been releasing his own albums since 1983, and has kept going strong all these years. Almost thirty years later, Danzig traveled to Lawrence, Kansas to record his newest album, Loud and Clear, which he released in December of 2011. Danzig's folk and Americana roots show up, giving each song a sort of down-home feel. Loud and Clear can easily be considered a southern rock album in those aspects. There are also very noticeable traces of other bands' sounds throughout the album; whether he considers them influences or not isn't mentioned in his bio, but I hear glimpses of the 90s alternative sounds we got from Barenaked Ladies and R.E.M. In an interesting - and surprising - shift in sound, "The Smile of My Old Face" takes on a disco vibe. If you can remember the song "Canned Heat" by Jamiroquai (more famously known as the Napoleon Dynamite dance), you have a good idea of what that song sounds like. "Peace To Us All" follows along with the BNL/R.E.M. sound, but has a hint of the 70s' "Jesus music." It's light, but it reminds me of other bands I've heard from that era. Loud and Clear brings with it a message of hope and perseverance, clearly sung of in the song "Never Give Up," where Danzig reminds the listener that "In the darkest night, there's a ray of hope, let it shine on you, never give up." It's a message that continues on through the entirety of the album, and is sure to be an encouragement to fans of Americana and southern rock music.