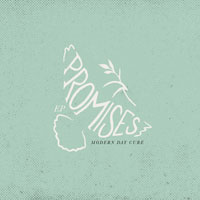 Contemporary worship band Modern Day Cure has some success stories to boast; from opening for artists like Lecrae and the Newsboys to winning Big Ticket Festival's indie band competition, they seem to be making some waves in their community. Fast forward a few years, and the three-piece from Michigan is once again offering a recording of the music they're becoming known for. Their 2015 effort, the Promises EP, is a well-produced, uplifting, four-song venture that checks off all the main characteristics of a major label worship release. "Hand of God" borrows from a number of Hillsong anthems, from the guitars to the occasional use of rhythmic double bass, engaging the listener from the start. "We Are The Brave" switches gears a little bit, both in sound and message; a less energetic song, Modern Day Cure brings the focus onto the people of God, in a sense. Instead of selfishness, the song really celebrates who we are because of what Jesus has done for us, not anything we could have done for ourselves. It's not really a song I would expect to find on a worship playlist, but it's great for encouragement if you've forgotten what God thinks of us. The title track follows, which makes best use of the vocals, provided throughout the EP by co-lead vocalists Tamar Chipp and Tifani Autry. "Promises" praises God for always following through on the promises He makes to us and never forgets about. It's the slowest track and serves as a great testament to His faithfulness. Rounding out the EP is a slightly more upbeat track called "Always Good," which is the clear weak link, as it feels like the band struggled to write more meaningful lyrics. As such, it's unfortunate to hear lyrics like "We are gathered in this place to remember and proclaim, the Lord is good, we're united in our praise to exalt the God who saves, the Lord is good" and "In the breaking, in the blessing, He is always, always good." It's a wonderful great reminder of God's nature, but it's set to a song that is far less appealing than many others that offer the same message. Modern Day Cure will make a great addition to your library if you fancy artists like Chris Tomlin and Jesus Culture, and I wouldn't be surprised to see them on the roster of a record label like Integrity in the future. - Review date: 2/6/16, written by Scott Fryberger of Jesusfreakhideout.com