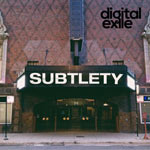 Desiring to pursue music for several years, but having to put plans on hold because of various circumstances, Gabe and Luke Chase finally decided to dive head first into forming their band. With drums and lead guitar covered, the brothers from Connecticut recruited friends Jonny Hopwood and Kristian Otten for vocals and bass respectively, and Digital Exile was born. Boasting a progressive rock sound akin to veteran bands Incubus, Thrice, and Muse, the independent band's full-length project, Subtlety, is the group's first foray into the scene. Upon listening, the band tries convincingly hard to emulate their musical influences, even if the result is decidedly less polished. What Digital Exile does do well is let their musicianship speak for itself. Very often the guitar solos are the cornerstone of a given track, and most of the time they showcase realized and practiced talent from each member, but almost every track anchors to a moderate pace that keeps the album at an almost "monotone" level (save for the acoustic-based "Winter Solstice"). On the side of the vocals, Hopwood's vocals (which are relatively similar to Incubus's Brandon Boyd's in style) maintain the right key reasonably well through Subtlety, though he should be careful not to stretch himself for unreachably high notes (such as on "Autumn Bloom"). In general, though, the vocals aren't terribly interesting, and there seems to be a missing piece of passion in the vocals that would give each track a better sense of urgency. With the occasional vocal digital effects here and there, Digital Exile attempt to keep the vocals from becoming forgettable, but they definitely take the backseat in the album's focus. Still, lines like "now I'm a man without a country/but I'm proud to wear the title/in the end I will find everything that I was looking for" ("Once Upon a Time") and "when will you wake up/look inside our lives and see that we've lost all subtlety" ("Black Cloud") demonstrate that the band can write lyrics decently well (and with a good amount of conviction), even if they could be fleshed out a bit more for the maximum impact. In the future, Digital Exile would do well to keep every song distinctive from the other, as by the end of Subtlety's ten tracks, most (but thankfully not all) seem to run together without much flow for the album. Perhaps introducing more guitar effects and possibly more instruments (keyboards or synths, for example), would emphasize the "progressive" in the progressive rock the band wants to play, and the vocals could improve in range as well. While Digital Exile may have a long way to go in creating a sound that's both accomplished and all their own, Subtlety is a genuine first step toward bigger things ahead. - Review date: 8/3/13, written by Roger Gelwicks of Jesusfreakhideout.com 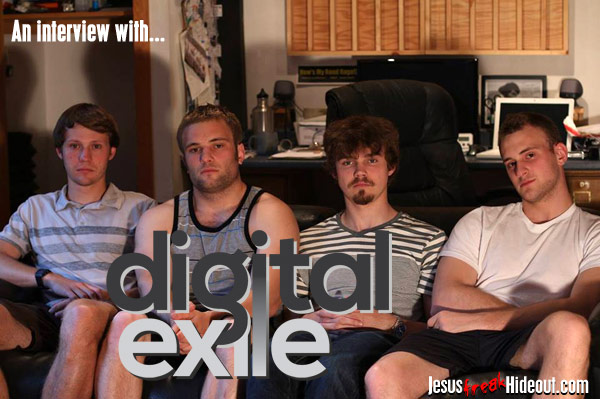 Luke Chase: Our name, Digital Exile, has to do with our artistic frustration with the digital medium. I like to write more conceptual albums, where the songs flow into each other and the lyrics share a common theme. But the emphasis in the current environment is on short audio bits and single songs, which fragments our vision.

Luke: I have always loved the lyrical approach of Thrice because they have presented biblical passages and verses in contextual ways where they can still be thought-provoking, but easier to understand for those who would not be willing to read the Bible (based on their own principles). Most of our influences write introspective lyrics that observe and critique with poetic depth. That is not to say we agree with everything they have to say, because we certainly do not. But they are artists, nonetheless. In terms of our music, we are influenced by the progressive rock genre. We have always desired to write music within that genre that can display a level of technicality, but never at the expense of the melody. These are some of the bands that we believe have found a good balance of that.

Luke: The main challenge has been getting everyone together for recording/touring. Some of us are still in school (undergrad and grad), and the rest have jobs. Our debut album was a wonderful project to accomplish. We were unable to do any shows this summer, but we have plans for next summer. We'll just have to see how that goes. I have always been a fan of unique live performances. The bands that I like to see live always know how to keep the audience guessing. Energy, stage-presence, and showmanship are huge. It's also important to not necessarily change the songs, but to play them differently by adding to them. I wrote this album years ago, so it has had some time to develop and hopefully mature. As far as the live performance of these songs goes, I think they will continue to undergo development.

Luke: We are releasing a bonus track around Christmas time. It will be a little more dance-driven, and different from the rest of the album. When we went into the studio to record our debut album, I had already written 3 and a half albums. We will (Lord-willing) enter the studio next summer to record our second album, which is completely written.

Luke: I think, like any independent group, you have to rely heavily on friends and family to check out your music and spread the word. We have sought to be proactive in marketing the album and it's been quite a learning experience for all of us. Right now, this is not our employment, so it is easier to maintain our vision for the albums.

Luke: The Lord has taught us to wait on His timing, stay humble, be thankful, and not hold onto this too tightly. My brother Gabe and I couldn't help but thank the Lord everyday we went into the studio. This album has been written for about 6-7 years, and we are truly grateful to see it come to fruition. In theory, it's easy to stay humble while not many people know who you are. However, humility is never easy; no matter how big or small your band is. We are learning to trust Him, and see where He leads.