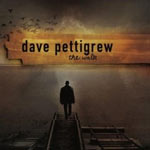 Lots of artists in the Christian music industry got their start as the worship band for their home church, such as Casting Crowns and even Showbread. One such artist that is springing up from the New Jersey area is contemporary independent artist Dave Pettigrew. Having opened for the likes of MercyMe, it's safe to say that he's gained at least some recognition in his part of the country. His fifth release comes about a year after his last release, Solo Volume 1; it's a five-song EP called The Walk. Pettigrew's sound can very easily be described as contemporary. There are upbeat times with subtle hints of rock music, like the opening track "The Love of Jesus," but overall it's pretty simple contemporary music, along the lines of a slower Matt Redman or MercyMe. There's even some of the cliche guitarwork you can find in a plethora of Chris Tomlin songs in the closing track "Hallelujah." Pettigrew does display some good musicianship, but it can almost be lost in the monotony of the majority of the music. He's talented, yes, but there's nothing particularly memorable or outstanding about the music of The Walk. When it comes to the lyrics, he does well to represent Jesus and to make the message an easy one to relate to. But after reading his bio, which states that Pettigrew is a "lyrically wide-reaching breath of fresh air in Christian music," I obviously expected some exceptionally-written lyrics. Again, his message is one that simply can't be beat (the message of Christ), but I was left unsatisfied by the writing in and of itself. It's a bit saddening to hear a singer/songwriter who pens rather underwhelming lyrics, but even more so when you've previously read that "his specialty is challenging intellect and turning hearts with his thoughtful, thought-provoking lyrics." Dave Pettigrew's potential to reach the lost in his area is wide, especially playing a style of music that is accessible and enjoyed by many. As an artist, however, his music and lyrics do fall a little short. You may like The Walk if you like Tomlin's style of music (or even if you like the band Live, as Pettigrew's voice bears some resemblance to Live's vocalist, Ed Kowalczyk), but if not, you probably won't get much out of it.