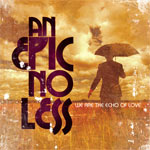 An Epic, No Less
We Are The Echo of Love

In 2010, electro pop worship group An Epic, No Less received a lot of buzz due to their upbeat sound on their short album We Are The Echo of Love (the fact that their album was available for free download helped too). Todd Larson and Daniel Chancellor are the two main members of An Epic, No Less, and they display their talent in the genre they call "gospelectronica." It's a pretty fitting name, except that there's no gospel anywhere to be found. It's really just electronic worship. And while the songs are thoughtful and glorifying to God, I can't help but get over the fact that it just sounds so much like Owl City. So much that, at times, I forget that I'm not listening to Owl City. They are noticeably different, too, but when they are, it's somewhere along the lines of Seven Places, Tenth Avenue North, or a great number of other bands in the pop rock field. The guys create some pretty catchy tunes, and it's no wonder that they're getting some good press. But We Are The Echo of Love is okay at best, and another example of Christian music's odd need for Christian "versions" of mainstream bands.