Poised to launch her solo career, South African native Adie Camp (aka formerly known as Adrienne Liesching) has taken time out of her busy schedule promoting her new album Don't Wait to answer a few questions about life after fronting The Benjamin Gate, life as a mother of two daughters, and opening her own clothing store...
This interview took place on: August 8, 2006

Adie: Music wise? That's about it... I decided to take a break after my time with TBG. We worked SO hard and toured like crazy and I honestly just felt so burned out. I didn't think I would go back to music, but in that time away I got married to my incredible husband Jeremy and had a baby girl Isabella, both of whom God used to refresh and enrich my heart sooo much. And then of late, Jeremy and I have had another precious girl Arianne (pronounced Ari - anne) and we've both been in the studio and then I've been busy setting up a clothing store... It sounds crazy busy, but honestly it's been great and I've really felt God leading me every step of the way.

Adie: Well firstly the whole writing process has been completely different. In TBG, we all wrote together and conglomerated on everything. Then we tried to push the mold as much as we could. With my solo stuff, it's been a lot more laid back. I have grown so much in my walk with the Lord and I feel like my perspective on what matters in this world has changed too. It's been mostly Jeremy and I writing together and then we redid a couple songs with some friends...

Adie: He has been a huge encouragement to me musically and spiritually. We wrote a lot of the songs together and he also co-produced a bunch of them with our friend Zach Hodges. He is a great song writer and musician, so it was fun to write together and a privilege to have his input on things. I know he loves that I love the Lord and so it was awesome to have his encouragement in the way that I was expressing my love for Jesus in music.

Adie: Ooooh. This is a tough question. I'd have to go with "What Have I Done." I could listen to it over and over and still love it. My friend Suzanna Pautz (the wife of one of TBG's band members - Marc Pautz) wrote this song years ago and just never finished it. I've always loved it and so I finished it and put it on the album. It really sums up a lot of how I feel toward the Lord - just knowing that I have never done anything that deserves the full measure of what He has given me and that's just starting at eternal life with Him - nevermind my husband and family and every spiritual blessing God has richly supplied. But He has made us worthy of Him through His death on the cross - wow!

Adie: Well, my Dad loves sixties and seventies music and I grew up listening to the Beatles, the Who, the Kinks and all those bands. It reminded me of my Dad and living on the other side of the world from my family (in South Africa). It was kind of a fun sentimental tribute to him. Also, it is a great passage from the book of Ecclesiastes and so even though it's originally a secular song, it's straight from the Bible.

Adie: God has shown me so much about his love and guidance through being a parent. I feel like my heart has tripled in size and I can't explain to you the blessing it is to have my girls. I have learned so much and continue to learn. I don't know if being a mom has changed my musical approach, but God has definitely used it to grow my heart and show me so much and so I have more to write about.

Adie: We are taking the girls on the road with us in the Fall. It's going to be awesome. A friend or ours is coming along to watch the girls when I can't. I'm so excited to be back on the road with Jeremy and all together as a family too. Isabella took her first steps on a bus and she is amazing at adjusting to things going on. She just sees it as an adventure. ;)

Adie: It's kind of a long story how it all came about, but Jeremy and I prayed about it and we saw everything come into place for us to open the store. We have a huge college community here that desperately need God and what a great way to minister to them by opening a clothing store on campus. We opened in the middle of August this year and already I've had amazing opportunities to share about Jesus with people. Because we get to choose what goes in the store, I also see it as an opportunity to encourage girls especially, to dress modestly and they can still look cool. We'll be playing Christian music in the store and so far we also have three Christian clothing lines that we support. All the people working at the store are awesome strong Christians who are fully aware of this opportunity to love the people who need it most. I know the fashion industry can be risky, and I know some people might not approve, but I really believe that the Lord will use this, because that is our main hearts' desire. Please keep us in prayer that we will be an example of Jesus to the people that we come into contact with.

Adie: I've had such a desire to really seek the Lord with all my heart - to wake up early before the girls do and pray, pray, pray. I know I need to be on my knees laying down every area of my life and pouring out my heart to the Lord. I feel like He is doing a lot in my heart right now and I'm just really excited about the next season that I'm moving into. I know when I feel like this, though, that Satan will try distract me from being faithful, so it's even more of a battle to be obedient.

Adie: Thank you for this interview! I really hope you guys enjoy the album when it comes out and thank you for your prayers and support!
Lots of love,
Adie 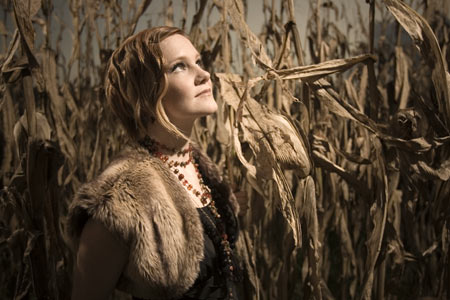