Although there is no set release for a new record, we sat down with rock band Project 86's frontman Andrew Schwab to discuss the past and future of his band during GMA Music Week 2008. While lounging in one of Tooth & Nail Records' suites in the Renaissance Hotel in Nashville, TN, we discussed with Schwab Project's most recent record Rival Factions, their first EP release last year, and what we can expect from them next...
This interview took place on: 4/22/08.

**Hear this interview on our iTunes JFH podcast!**

Andrew Schwab: We're just about to start. That's kind of the next thing on the docket. We've been talking about it over the last month.

Andrew: I would like to do a heavier record than our last record [Rival Factions]. I'm not necessarily in control of that and neither are the other guys. The approach for us has always been to write what comes out and whatever comes out comes out. You can't really control or force things. You know? The way we're relating to one another and the music that we're into at the time is kind of what comes out. That's kind of where my heart's at. I always gravitate towards the heavier stuff. I would always much rather scream than sing. But I like singing too. I love trying new things. I've talked to different people about Rival Factions and it's been really well received by the press and people who maybe weren't as familiar with our band before or maybe weren't as into our older stuff. All of the diehard fans are like "It's not heavy enough."

Andrew: All we can do is make music that we like. You kind of let the chips fall from there. But I definitely want to do a heavy record or more intense or angrier I don't know what word you want to use. The last couple of records, we definitely experimented with a lot of different sounds. I definitely don't want to repeat ourselves in any way. And I think that's what's been good and that's what's given us a lengthy career. It's the fact that people count on us to do something different every time around to keep it interesting. Dude, if we made five Drawing Black Lines, by the second or third one, people would start getting bored.

Andrew: You can't win. *laughs* Honestly man, being on this side of it, the most you can hope for is some great songs on every record. And I feel like we've done that. Even with my top five bands, I look at every record, and there are three or four songs that I love and then there are some that I skip.

Andrew: I think that's mine too

Andrew: That's a good jam. I really like "Molotov" because it's so different.

Andrew: Thanks man! See, I always forget that you genuinely listen to our band, so that's cool.

Andrew: Yeah, because it was very low maintenance. With a traditional release, there's so much setup that goes into it because you're dealing with retail. With iTunes, you just give them the music and they put it out. For the fans, it wasn't the best experience because there were all these logistical things. iTunes has not streamlined their whole system yet. They weren't on time with posting the EP. The booklet wasn't up and there were all kinds of problems. Then international was delayed. And even now, I'm being told it's only available internationally in Canada. So one of the next battles we still have to fight is getting that available completely abroad. So dealing with that has been a challenge in that respect. But for a way to get music out to fans faster, it worked great. (John: And it was low cost) Yeah, you know, you're cutting out some of the middle-man type of thing. Our goal with the EP and the reason we did it is because we wanted to take a few of the songs from Rival Factions that we didn't put on the record because they didn't fit the album as a whole. Not because they were b-sides. "The Kane Mutiny" and "Rte. 66" were two songs we were really happy with, we just didn't feel like they fit at the time [on Rival Factions]. I think in retrospect, "The Kane Mutiny" could've been a good track. That's what we thought of initially when we wrote the song - "Aw, that's gonna be track one". There's certain songs that come together really well and there are other ones that are kind of arduous. And that was a really arduous song to get it where we were happy with it. And by that time we were just kind of sour on it. You start losing your ear for it. I re-recorded that song vocally like four times because I wasn't happy with the lyrics or I was wasn't happy with how certain things sounded or I wanted to try a different approach. And finally we were just like "Dude, we're over that." Now, in retrospect, I'm like "Aw, maybe we should've put that on the record." But it worked out because instead of a year or year and half between releases, here was some new music for our fans midway through our album cycle. So in that sense, it was a cool thing. Anyways, it was a good experience. The best part of it was recording "Lucretia, My Reflection" because it's a cover song and it's fun recording a song that isn't your own. It's an interpretation.

Andrew: Yeah! It was awesome and we did that Christmas song right after that. That was a great experience, and that was another cover. The original was drastically different. You should listen to it. It's the same name, "This Time of the Year," by Brenda Lee. *laughter* Yeah, look it up on iTunes, you can download it. Our version was a little bit more like A Nightmare Before Christmas. I was thinking the other day that it would be really fun to do an entire Christmas record with that kind of vibe. (John: Or at least a Christmas EP) Yeah, like a Christmas EP of all those kinds of songs.

Andrew: Yeah that'd be really fun. It's just the matter of if we're recording an album and making time to do that as well, that's a lot of work in a short period of time.

Andrew: See, I personally love taking out the booklet and reading it because it's a visual representation of the music you're listening to.

Andrew: It's sad. We're doing everything we can to resist that. The reason we wanted to do a pretty involved package is to motivate people to retain some sort of concept of a physical CD. It's a losing battle. That idea of having the coded messages with the colors and all that is an idea that I've had for a really long time. In fact, I don't know if you remember when you were a kid, but sometimes you'd buy a G.I. Joe or whatever and they'd give you a little piece of red film and they'd have secret messages on the back that you'd have to read. That was where the idea came from.

Andrew: Yeah, and that was the whole point of the thing. The designer of the layout did a good job of exploiting that concept and stuff. There are certain songs where you can't read the lyrics. So it was fun and the finished package is very interesting and it's stimulating to look at. It's different.

Andrew: I'm almost done with a new book. I say "almost" because it could be a couple more months. I've been working pretty hard on something new.

Andrew: A little bit. It's definitely more directly spiritual. There's more Scripture, and God, and a lot of personal experiences and stories and things. It will read in a similar way to It's All Downhill From Here: On The Road With Project 86. I'm kind of more schizophrenic about telling stories versus lists and rants. It's definitely linear. It's about my take on God's personality and how He deals with us and the irony of that. I know that sounds pretty broad, but some specific things that I think He does consistently in our lives that we miss and that if we thought about on a regular basis, we'd probably have a better approach to faith.

Andrew: I do, but I don't want to share it yet.

Andrew: I write a lot based on emotion to tell you the truth. If I feel passionately about something or passionately disgusted about something, that's what I'll write about. Music is about emotion. As much as you can convey truth and words, I want people to connect emotionally to the music. Therefore, I try to write from an emotional perspective. If I'm feeling strongly about something at the time or if I'm just going through something that is great or horrible or whatever, then I try to capture that in words with my voice and the other guys with the instruments. The times where I've been able to do that effectively, those have been the best songs that we've written. It's all about emotion.

Andrew: There's been a lot. Last year when we were coming back from Germany, we had three layovers and we had to go through customs three times. When we were traveling in Australia, we didn't have to do that because they would just ship the bags through. For whatever reason, when we were coming out of Germany, we were going into London and then to the United States and we had to go through the whole experience like three times. That was awful and we went through every cliché in the book... from delayed flights, to long layovers, to running through the airport to meet the connection, to just annoying stuff. And of course every single time we fly into Chicago is awful, especially in the winter. That's like the worst airport in the world. Avoid it. But American Airlines is going through all this trouble now. (Amy: We always fly on US Airways) I don't know where there hub is, but American's is in Chicago and every time we fly anywhere we have to go through Chicago. (Amy: Philadelphia is US Airways) That's quite a bit better than Chicago. The best experiences are always the small airports. It's more expensive, but it's so low hassle. You show up, there's nobody there, you throw your bags up and get an Egg McMuffin, and get on a plane and you're ready.

Project 86's latest album, Rival Factions, is available now wherever music is sold. You can also get their EP The Kane Mutiny right now on iTunes.
For a 13-minute audio recording of this interview, visit our FREE iTunes podcast! 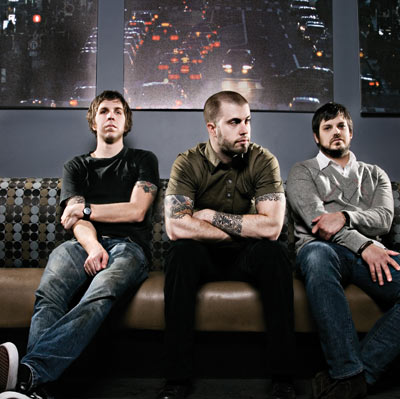