While preparing for the release his latest album No Excuses, No Regrets, gospel singer Steve Ladd took the time to chat with JesusFreakHideout about freedom, tent revivals, and pirates....
This interview took place on: May 16, 2017.


Steve Ladd: I've been singing my whole life. I started out traveling with my family, then when I was 19 I joined my first professional crew called The Anchorman, then I joined Gold City and stayed there for five years. I left seven years ago to start my solo career.

Steve: Thank you. I've always had a high tenor voice and would sing the high bar with the groups I was in. But since being solo I have to work on the lower register as well. I love to sing it all and feel I've been blessed with the boys that they could do a more traditional song or more modern song with that Steve Ladd flair. 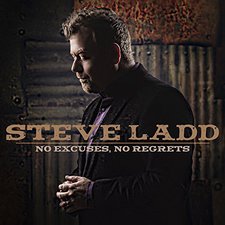 Steve: This whole album is from the journey I've been on the last couple years. Recently, I got set free from a lot of bondage from what happened to me in my childhood. I didn't particularly set out to select songs that had the theme of freedom but feel it was a God thing and I'm so glad. That's why this album so personal to me.

Steve: I've always been a ministry. I was raised as a child on stage being in my dad's revivals playing music and singing. I've never had any trepidation about sharing the gospel with anyone. The song spoke to me because there have been times I've been self-conscious or lacked the courage to walk through some of those doors. It's a great song and one of my favorites on the album.

Steve: Yes! My dad was in evangelist and we traveled as a evangelistic family all over the country. I'm the youngest of my siblings so I was the last to be on the platform playing or singing, so I would sit in the audience and listen to my siblings play and sing. I've always had a love for music--particularly gospel music.

Steve: I love the intimacy in what you've already done. It really speaks of my life in the fact that I have had personal struggles and triumphs that even in the dark times thank the Lord and feel blessed because he's done so much in my life. The scripture I like his 1 Corinthian's 13:6-7 "Rejoiceth not in iniquity, but rejoiceth in the truth; Beareth all things, believeth all things, hopeth all things, endureth all things."

Steve: Definitely pirates! We moved to a lake in Alabama two years ago. We bought a boat last summer and enjoy taking it out almost every day when I'm home.

Steve Ladd's latest album, No Excuses, No Regrets will be released June 9th, 2017 wherever music is sold!