Following a catchy indie rock debut titled This Too Shall Pass, Chicago-bred rock band The Fold hit back with a sophomore record that is as fun as it is sensitive and personal. We chatted with frontman Daniel Castady about the songs, the sound and their stint on the third ever Tooth & Nail Tour!
This interview took place on: May 25, 2007

Daniel Castady: We started out of 2 other Chicago bands, Showoff and Switchblade Romance, in late 2004. "The Fold" was picked because the second definition in the Webster's Dictionary says it means 'a group of people working together with one common goal'. That's what we do!

Dan: Yeah, this record was definitely more straight up, unfiltered lyrics about what was going on with me recently. I can't say I regret a word of it. I had a really tough year last year and I needed to get it out on paper. It was a sort of therapy for me. It wasn't so much about who was listening.

Dan: I found this phrase written on a wall in a truck stop bathroom somewhere. It seemed like it was written so urgently, it just stuck with me. When we started writing songs, they were revolving around that theme so we went for it.

Dan: "Faster Still" and "Revisited" are both songs about my cousin Andrew. He commited suicide at a young age, but struggled a lot with bipolar and schizophrenia before he did. He was my best friend, so it was really hard to watch him go downhill. "Faster Still" celebrated our younger years, we had such a good time growing up together, while "Revisited" talks about life after he was gone.

Dan: "Closer" and "Beside You Now" (among others) were songs I wrote about my Mom, but I chose to write them from my Dad's point of view. It seemed most important to me to understand the magnitude of her loss from my Dad's point of view. I mean, she was the most important person to me since I was a baby, but to lose your sole companion after 40 years of marriage would just be too much for me to handle. Also, he helped me with a lot of the lyrics in those songs, so I left them perfectly intact.

Dan: He was just grieving so much, writing journals about it sometimes even. He was finally being completely honest with God and himself about his own depravity, and he was finally repenting toward God in his life. It was such a beautiful thing for me to witness, and somewhere in the middle of it, something occured to me; My Mom, who was absolutely a believer, knew where she was going after she died. The real question was what would become of my Dad. Only through my Mom's passing could God have gotten my Dad's attention, and he knew that. I'm not trying to blame God for her death by saying this, but my Dad and I have had great conversations about the fact that it was absolutely God's grace that brought him back to His side. As a family, she was a sacrifice for our own salvation. We haven't lost a thing!

Dan: This is a song that I wrote for my sister, Becky. She has a better voice than I'll ever have, and I just wrote the song as a way to say that she should always follow her dreams.

Dan: That's a really hard question. I think I probably took more influence from bands like Face To Face and Green Day than anything that is going on right now. And, of course, I always look back to the key songwriters like The Beatles, Billy Joel and Elvis Costello who shaped (what I think is) the quintessential pop-rock and roll sound.

Dan: We just didn't want to build any unnecessary walls around what this record was going to sound like. There were times when we even worried that it wouldn't sound cohesive as a whole, but luckily that all got ironed out in the studio. This album was probably more songwriter oriented in the fact that we weren't afraid to leave a song alone if it worked well in it's demo state. Also, we went in with eleven songs, and finished recording with eleven songs as well. I think this was a really good thing, because every song got the attention it needed... and the producers were AMAZING, at that!

Dan: It feels great! Those guys make us feel so welcome. We hoped they would be cool, but they surpassed anything we expected. They hang with us all the time. They are such grounded, down to earth guys. Love 'em!

Dan: I wanna see Pirates [Of The Caribbean] III when I get home from the tour. I just got back from a vacation with my wife in Dominica, so I got to see all of the places that they used to film the movie. It's such a wonderful place!

Dan: God has been showing me that He's been there every step of the way over these past few years. I'm so quick to think He's forgotten me, but that just isn't the case.

Dan: www.thefoldrock.com is the place to be. Say hi, talk to us. Let's be friends!

The Fold's latest album, Secrets Keep You Sick is in stores NOW! 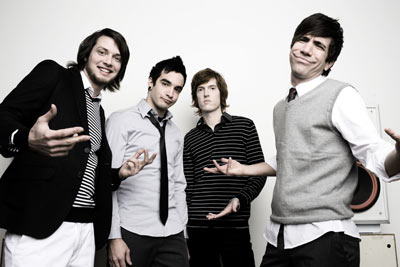