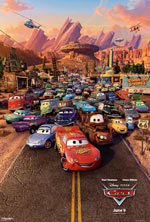 Lightning McQueen (voice of Owen Wilson), a hotshot rookie race car driven to succeed, discovers that life is about the journey, not the finish line, when he finds himself unexpectedly detoured in the sleepy Route 66 town of Radiator Springs. On route across the country to the big Piston Cup Championship in California to compete against two seasoned pros, McQueen gets to know the town's offbeat characters including Sally (a snazzy 2002 Porsche voiced by Bonnie Hunt), Doc Hudson (a 1951 Hudson Hornet with a mysterious past, voiced by Paul Newman), and Mater (a rusty but trusty tow truck voiced by Larry the Cable Guy)  who help him realize that there are more important things than trophies, fame and sponsorship. Fueled with plenty of humor, action, heartfelt drama, and amazing new technical feats, Cars is a high octane delight for moviegoers of all ages.
(from MovieWeb.com)

If there's any film studio churning out one quality film after another to near flawless results, it's Pixar Animation. The Incredibles was the studio's last effort and the film truly lived up to its title. Their latest project, simply titled Cars, was slated for release last year but was delayed to have further work done to it. The end result is up to speed with its predecessors, but doesn't exactly top them.

It's hard to ignore the fact that Cars is heaps of fun from start to finish. The visuals are the best you could imagine from animation and the voice acting is spot-on. As with many of the other Pixar vehicles, Cars is also chock-full of mini homages to their previous films, inside jokes, and clever ideas to create a new, yet familiar, world. While this was touched on with the city atmosphere in A Bug's Life or the world of scary creatures for Monster's Inc, Pixar has gone the distance with Cars to make a human-free world inhabited exclusively by all kinds of automobiles. From insects represented as tiny VW bugs with wings to farm tractors being the equivalent of cows, Pixar successfully continues to think outside the box.

The story isn't especially original, but stands to be unique in its own right despite familiarity. The film follows hot shot rookie racecar Lightning McQueen, voiced perfectly by Owen Wilson, who gets lost in a rundown town and held there until he repairs a road he accidentally damaged. While there, he finds friendship among the country folk, learning things that life in the fast lane wasn't teaching him. While certain story aspects reminded me of other films and stories (especially the stranger-saves-small-town-who-change-his-life-in-return angle of Jim Carrey's underrated The Majestic), Cars has enough charm and its own personality to stand out. And the other voice talents didn't hurt this either. Those that especially stood out were blue collar comedian Larry The Cable Guy as Mater, veteran actor Paul Newman as Doc, Monk's always delightful Tony Shaloub as Luigi, and Michael Keaton as the rival Chick. Although they had very little screentime, Jeremy Piven was a nice surprise as Lightning's manager Harv while staple Pixar voice contribution John Ratzenberger was also wonderful as Mack.

While it's hard to think of a single negative thing about Cars, something seems to hold it back from the greatness that the Toy Story films and The Incredibles achieved before it. Perhaps it's harder for us to relate to automobiles given human traits, I'm not sure. Another problem may be the film's pacing. While a wonderful story and perfectly written to "flesh" out the characters, it may not move along quick enough to really keep the kids interested for its duration. They're the kind of problems that great stories like The Majestic and The Kid have suffered. The other problem Cars may endure, is that it's a bit too long for an animated film. While adults can absorb and appreciate each moment of screentime, I can see it being difficult for a child to make it through its 2 hour running time, let alone the slower romantic moments.

Whatever the flaw that might exist within the confines of film that comprises Cars, it's a fine addition to Pixar's catalog of animated features. With great comedy, great visual, and great characters carry Cars to the finish line, Pixar continues to create films with the right elements that other Hollywood filmmakers should be looking to for examples on how to do it right. Oh, and all viewers should stick it out for the entire credits, and even after they end, to catch all of the film. Some of Cars funniest moments are in the credits, and will be appreciated especially by those who have been enjoying Pixar films for years.

Sex/Nudity: Lightning points out a tattoo on the bumper of Sally's car; Mater jokes with Lightning that he was getting "cozy at the Cozy Cone" (with Sally, but they weren't)

Vulgarity/Language: 1 "Oh L-rd," and although not really profanity, Radiator Springs is referred to as "Hillybilly Hell" twice

Alcohol/Drugs: Filmore apparently makes "homemade organic fuel" and appears to be burned out like a hippie who had done drugs (Sarge says "The 60's weren't good to you, were they?")

Violence: Some racing car crashes, which obviously can be more harrowing since the car that is crashing has a personality Disclaimer: All reviews are based solely on the opinions of the reviewer. Most reviews are rated on how the reviewer enjoyed the film overall, not exclusively on content. However, if the content really affects the reviewer's opinion and experience of the film, it will definitely affect the reviewer's overall rating.