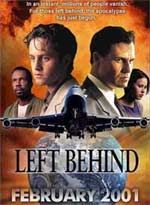 Left Behind- the Movie 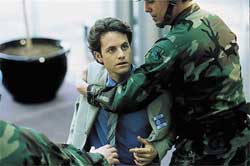 While the rise of a new dictator in the United Nations begins to spark peace settlements in Israel, things begin to go crazy when suddenly hundreds of thousands of people disappear. Utter chaos breaks loose as people search for answers to the cause of their vanished loved ones. TV reporter Buck Williams (Kirk Cameron) becomes to determined to get to the bottom of the mystery and encounters several life-threatening situations on the way.

Stop the press. Hold the reviews. Dismiss what you saw in the video copy of Left Behind: the movie and sprint to your local cinema complex to catch Left Behind on the big screen. Not only is the experience better, but the effects, audio, and video have all been tweaked for a better presentation.

I left the theater feeling like I saw a completely different film than what's on the video cassette. The official movie site talked about how things would be altered a bit for the theatrical release and the complaints I had about production were almost all cleared up with this release. I watched the special effects more closely this time, intently looking for the 'cheesey' feel it had on the video, but it wasn't there. The picture quality seemed much better, as did the audio. With these improvements, the overall feel 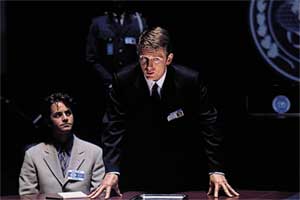 of the movie and the actors' performances seemed to improve.

The theatrical release of Left Behind: the movie is a step in the right direction for Christian film. Although they have a long way to go before mass crowds can poor in and critical critics can easily give praise, if they continue to try to improve these releases, we could see some more excellent Christian films in the near future.

Content-wise, the film still has the inclusion of some violent material. The extent being Buck having a bloodied knee from falling and when 2 men are shot in an intense scene at the end, we see a slightly bloody hole in the side of a man's head. Swearing is non existant (Buck even resorts to "What the heck is that?" at one point). Sex/nudity doesn't exist either, with only the implication that Rayford and Hattie were having an affair with them kissing briefly in one scene.

Overall, the movie was infinitely better the second time around and edited for the big screen. The production wasn't perfect, but it was much better. I hope this movie does well and that the following sequels (with The Tribulation Force being planned already) will be stronger, bigger, and cleaner than its predecessor. A wholesome movie but a little bit too violent for the younger ones. Catch it on the big screen for sure and bring a friend. With that, I give the theatrical release of Left Behind: The Movie a 3 out of 4.

Sex/Nudity: Rayford and Hattie kiss to imply they're having an affair, but nothing is seen or done.

Blood/Gore: After the rapture, we see a man walking around the scene of the accident with a large amount of blood on him from a head wound-- mostly dried up. Buck hurts his leg, creating a big bloody stain on his knee. Later a man is shot close-range in the head and we briefly see the slightly bloody hole in his temple (twice).

Violence: Car crashes, a car exploding, people hitting each other, people shot and some killed. Disclaimer: All reviews are based solely on the opinions of the reviewer. Most reviews are rated on how the reviewer enjoyed the film overall, not exclusively on content. However, if the content really affects the reviewer's opinion and experience of the film, it will definitely affect the reviewer's overall rating.