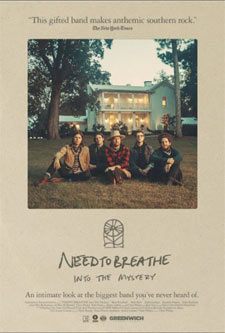 NEEDTOBREATHE: Into the Mystery

Documentary chronicles the making of South Carolina band Needtobreathe's 2021 album, Into The Mystery. (from IMDB)

With the global pandemic turning our world as we know it upside down, the music industry was among the many industries greatly affected by the shutdowns and quarantines. Southern rock band NEEDTOBREATHE were grounded from touring life -- even with a new album freshly released, Out of Body, which they couldn't tour to support -- and the trio of Bear Rinehart, Seth Bolt and Josh Lovelace were restless and trying to figure out what to do with themselves. The solution came in the form of taking three weeks to create a studio from scratch inside a large, beautiful house in Columbia, TN, and record a new album. The band decided that three weeks is all they'd have to record this album, and if it didn't get recorded in that house, it wouldn't be recorded (with the exception, of course, of Carrie Underwood's guest spot on a song). What unfolded was a fun and intense 21 days making their latest studio album, Into the Mystery. Along with the regular three band members, the guys brought guitarist Tyler Burkum (Audio Adrenaline, Mat Kearney, Leagues) and drummer Randall Harris into the fold as the band's newest official members to help craft the new 12-track project.

Directed by Chris Phelps, NEEDTOBREATHE: Into the Mystery is a documentary that follows the band's journey throughout those three weeks. Phelps and his crew stayed with the band (and their album production crew) during their time at the house to capture the experience on video. The documentary starts out explaining the setup for their venture into the farm house, and defines the goals the band had for their stay there. Throughout the film, we see little peeks into the writing sessions, recording sessions, candid dinner conversations, and talking-head interviews with each band member and members of the album production team. We also see snippets of "live" acoustic performances the guys did on the porch of the house or out in the yard.

At just barely over an hour in length, NEEDTOBREATHE: Into the Mystery is probably just the right running time for a documentary. It starts out a little slow, but the joy, excitement and enthusiasm the band members share and exhibit throughout the documentary is unmistakably infectious. I, myself, found it to be a heartwarming journey, and it also brought new depth and life to the songs of the resulting album, Into the Mystery. I also found myself smiling along with the guys by the final moments of the story, and I wouldn't have minded to see it continue on for just a bit longer.

The guys are all pretty open and vulnerable about themselves, their time in the band, the fame the band has found through the years, and where they are now. In some ways, the documentary only lightly touches on a lot of different thoughts and themes, at times making NEEDTOBREATHE: Into the Mystery feel like an hour-long trailer for a bigger story -- or for the album itself. For example, towards the end of the documentary, Bear opens up about struggling with anxiety and depression, and that he finds writing songs a way he can communicate safely with others. Burkum also comments that he has often struggled with loneliness on the road and missing his kids to the point of crying himself to sleep. These emotional moments are only very briefly touched on before the focus quickly shifts off to something else, which can feel a little jarring at times. Another sequence has the team addressing their church backgrounds and answering the question of whether music is spiritual or emotional, but it doesn't linger too long on the topic. To further cement the feeling that the documentary is more of a teaser, there isn't a single song played or performed in full in this documentary. I realize that probably isn't the intent of this feature, but I wouldn't have minded one or two live acoustic performances of songs in full from Into the Mystery. Seeing the guys huddled together in the yard, standing outside the door of a barn, sitting fireside or kicking back on the front porch left me wanting a little more of that.

For those wondering about Bear's younger brother Bo and his exit from the band in early 2020, this is addressed later in the documentary, where the members - past and present - reflect on the tensions that frequently arose from the sibling disputes between the two throughout the band's history. Sadly, it sounds like Bo's departure is more of a blessing for NEEDTOBREATHE than anything (despite being clearly bittersweet), as one former member even described the band's previous environment as "toxic" because of Bear and Bo's relationship. Opening up about this also lends weight to the joy that's clearly found through their time together. Bear even comments that this is the first time in a while he's completely enjoyed making music.

Some of my favorite moments in the film were just hearing the guys hash out song ideas and trying to figure out how any given song should go. And after Switchfoot's Jon Foreman is welcomed into the home later in the documentary, and we see the gang sitting around the campfire talking, it's fun to hear them sharing unique stories from the road, their personal lives, and their careers. These moments were so great and just seemed all too brief; I would have loved a little bit more of these fireside moments or dinner table chats. It also surprised me that we never got an official tour of the house. We get glimpses of many rooms (and, oddly enough, almost all of the art hanging on the walls throughout the film are intentionally blurred out) as the story unfolds, but we never get to see details of the setup or layout of the homemade studio.

The content for NEEDTOBREATHE: Into the Mystery is mostly squeaky clean, as you'd expect. A candid moment during recording has Bear slipping in a use of the "S" word, but the audio drops out over the word (instead of a blatant beeping), which makes it easier not to notice. And depending on the viewer's feeling on the word, Bear also audibly uses "p*ssed" once during a talking head interview. There really isn't anything else to be concerned about, however. A few lyrics on Into the Mystery, that we hear in the film, reference smoking or drinking wine, and we briefly see a couple of the guys goofing off singing part of George Michael's "Faith," but they're rather minor things. Lastly, we don't see anyone drinking during the movie, but we do briefly see what looks like a glass of liquor sitting on the floor next to Bear's chair at one point (which then vanishes completely in a following shot of the same discussion session).

Overall, NEEDTOBREATHE: Into the Mystery is a quality making-of album documentary that shows a great band candidly creating a great studio album in a unique way. While the sight of the occasional masked face or fleeting mention of passing a test to be COVID free reminds the viewer that we're still, over a year later, dealing with the craziness of a global pandemic, it's inspiring to see a group of talented artists turning something terrible in the world into something truly wonderful and worth celebrating.

Fans won't want to miss NEEDTOBREATHE: Into the Mystery, and seeing it in a theater would certainly be a cool experience, but I can't really say this is a film that screams to be seen on a big screen. The distinct lack of complete musical performances only lends to that feeling, too. But still, it's a solid documentary worth checking out to fully appreciate NEEDTOBREATHE's latest album, Into the Mystery.

Alcohol/Drugs: Bear has what looks like a glass of liquor sitting on the floor by his chair in one scene.