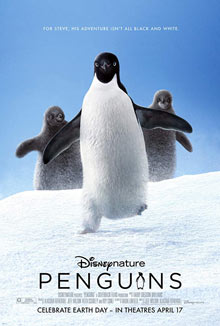 The story of Steve, an Adélie penguin, on a quest to find a life partner and start a family. (from IMDb) 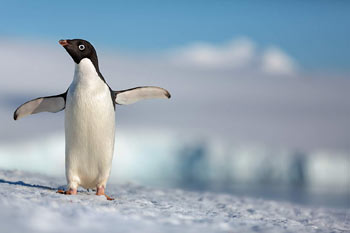 Disneynature has been a trusted brand of documentaries for many years, and in honor of Earth Day, the film studio has released a new adventure following the life of a single Adelie penguin. Dubbed "Steve" by the film crew, this quirky little penguin is the perfect choice to center their latest film around, narrated with charm by actor Ed Helms. Helms not only narrates Steve's ventures, but he also provides a voice for the brave little guy, which only makes the animal more endearing and relatable.

Admittedly, aside from movie making-of featurettes, I'm generally not much for documentaries. It's not that I entirely dislike them, I just kind of have to be in the right mindset to watch one. And, if I'm being honest, many can be frightfully dull. The Warner Bros.-distributed Pandas documentary (that I just recently watched and reviewed) was sadly more on the dull side and didn't really manage to connect the audience with the film's furry subjects all that much. Instead, it followed the pursuits of a few scientists but still managed to feel distant and disconnected. Disney's Penguins really puts the viewer out there on the ice, following the Adelie penguins in an intimate encounter. In fact, you'll often wonder how in the world they captured the footage they did (B-roll footage featured during the end credits does, however, answer that question quite impressively). 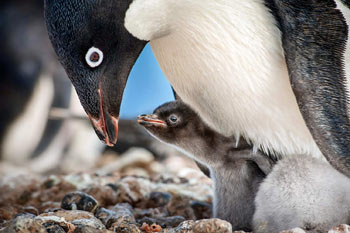 The story of Steve follows the adorable little fellow through mating season, where he meets and woos a cute little female penguin and they end up hatching and caring for two little baby penguins. The story continues to where the foursome have to migrate through dangerous, sea lion infested waters and harsh climates to make it to the next stage of their lives. It's exciting, beautiful, scary, and funny. All the while, Helms takes us through the journey with fun little comments, voices for some of the characters, and offers a little help explaining what the animals are trying to do. It's a gorgeously shot, wonderfully delivered documentary. If you're looking for a straightforward doc that delivers facts about the Adelie in great detail, this might not be the film for you, but it otherwise does well to provide viewers with some factual information while telling a story.

The content is pretty family friendly and appropriately G-rated. Things are intense a couple times when the penguins are being threatened by the sea lions or killer whales, but nothing shown is especially graphic. The only content that may gross some out is when we see the babies feeding on the regurgitated food from their parents' mouths. Otherwise, aside from a life-and-death situation near the film's finale (which, spoiler alert, thankfully turns out okay), it's a pretty safe watch.

Overall, Penguins is a great documentary for those who don't usually like documentaries. And if you love penguins, it's a must-see. (And fans of The Office will definitely appreciate a subtle reference to Helms' character's catchphrase that he gives to Steve in one scene.)

Sex/Nudity: There's talk about animals mating and trying to make themselves appealing to win over a mate, but nothing is said or shown that is inappropriate.

Violence: The cold, harsh weather and winds threaten the lives of the penguins. At one point, we think maybe a main penguin has been buried in snow and may have died, but they survive. We see killer whales swimming by the penguins, threatening them. We see sea lions pop out of the water, chasing after penguins, and we see them pull some penguins under the water. (But it's not graphic.) The most harrowing and tense moment of the film is when a young penguin is pulled under the water by a sea lion. It then plays dead so that the sea lion loses interest. When the lion does, the penguin swims to safety. Disclaimer: All reviews are based solely on the opinions of the reviewer. Most reviews are rated on how the reviewer enjoyed the film overall, not exclusively on content. However, if the content really affects the reviewer's opinion and experience of the film, it will definitely affect the reviewer's overall rating.