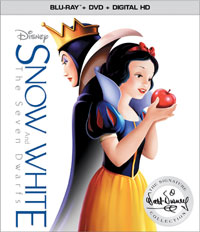 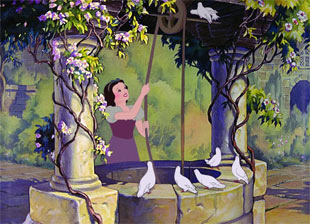 Forever enchanting and inspiring, Snow White And The Seven Dwarfs embodies The Walt Disney Signature Collection's legacy of animation. In this epic story of love and friendship, the kind and beautiful princess Snow White wins the hearts of the Seven Dwarfs and triumphs over the evil plans of a wicked Queen. Share the movie called "The Greatest Animated Film Of All Time," (American Film Institute) in High Definition Blu-ray and for the first time ever on Digital HD, with special features for the entire family! (from Walt Disney Pictures)

It's almost hard to believe that the first animated feature film is celebrating 79 years in 2016. Snow White & The Seven Dwarfs was the very first animated feature film, and it also marked the birth of Disney's animation studio, which would go on to produce many, many more feature films over the years. And with Disney's Snow White on the cusp of turning 80, Disney has released the film in a new "Signature Collection" edition on Blu-Ray disc -- its first re-release since its 2009 Blu-Ray debut and its return to the vault in 2011.

I grew up watching a lot of the classic Disney movies. To think that Snow White & The Seven Dwarfs even predates my parents is hard to wrap my head around, but revisiting Snow White as an adult -- and in high definition -- allows me to view it with a new pair of eyes. And, to be honest, I apparently forgot most of the film since last seeing it when I was little. For one, it's intriguing to note how the human characters -- like Snow White, Prince Charming and The Evil Queen -- are drawn in a rather realistic fashion. Furthermore, those characters' acting is very much in the style of live action films from the 1930's--and it actually feels like it. I was impressed with how the film opens and sets up the villain and then our heroine, but I was actually rather surprised at what unfolds once Snow White meets the seven dwarfs -- the plot kind of grinds to a halt to let a series of silly and cute moments involving the dwarfs to make up most of the pre-climactic story. It feels a little aimless for a bit, however, one has to remember that this isn't a recent film by any means. We live in a time where most of our entertainment is super fast-paced and frantic in nature, and stories that aren't blasting viewers with rapid-fire jokes and relentless quick cuts are a thing of the past. So a film like Snow White & The Seven Dwarfs is brimming with charm for not only its historical merit, but for the lovable characters it boasts, memorable songs and beautiful animation. (And its HD presentation really allows that to shine through.) 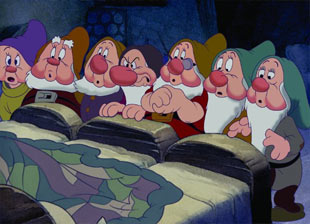 This G-rated classic may still have some content to frighten the little ones. The evil queen is rather scary, for one, and one sequence even involves the Huntsman creepily sneaking up behind a defenseless Snow White with a knife raised following an order from the queen to bring her her heart! Obviously, the Huntsman doesn't go through with it, but it does send Snow running frantically into the forest where she sees spooky eyes lurking in the shadows and the trees looking alive and quite frightening. The scene quickly turns from frightening to sweet when the forest animals show their concern for Snow, however. Later in the film, we see the evil queen transform herself into a frightening witch who then tricks Snow into eating a poisoned apple. Snow then goes into a deep sleep (and presumably dies, but apparently the dwarfs can't bear to part with her, so they display her in a glass case...), until the arrival of Prince Charming to save the day. There are certainly some heavy themes and scary content for young viewers, but the heart of the film is big too, and the quality of this Disney production is worth experiencing.

If you're a fan of Disney films and productions, chances are you've already seen Snow White & The Seven Dwarfs (and if you haven't, you really should). But, to be completely honest, if you haven't seen it all restored in high definition, you have yet to really experience this treasured piece of film history. And the new Signature Collection edition of Snow White & The Seven Dwarfs is a great way to remedy that.


The Signature Collection Edition Blu-Ray release of Snow White & The Seven Dwarfs offers a DVD along with it and a Disney Movies Anywhere digital copy. It's also available in just a plain DVD release. One thing to note, for movie buffs, is that the aspect ratio of the movie is not 16:9. It's the old school standard 4:3. Along with the feature film are a few new extras, in addition to the bonus features from the film's original 2009 Blu-Ray Diamond Edition release.

In Walt's Words: Snow White and the Seven Dwarfs (4:22) - We hear archival audio of Walt Disney himself talking about the movie while we see some archival video. He talks about the challenges they faced with making the film and how he was able to build his studio with the profits from the movie! 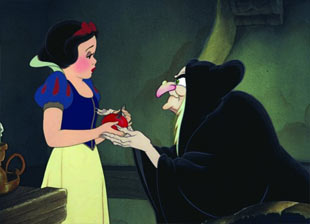 Iconography (7:16) covers the recognizable imagery from Snow White. Four artists create unique pieces inspired by Snow White in their own way and style.

@DisneyAnimation: Designing Disney's First Princess (5:16) - Animators and art directors reflect on the film, concept art and how things have changed today since this film debuted.

Snow White in 70 Seconds (1:12) is completely out of place here. It features a young girl rapping about the whole plot of Snow White. It's pretty horrendous. (Furthermore, it's new, but it feels like something painfully cheesy from the 90's.)

Alternate Sequence: The Prince Meets Snow White (3:39) is a recreation of early concept art. It features a reenacted (but not actual) voice of Walt narrating the sequence.

Disney's First Feature: The Making of Snow White and the Seven Dwarfs (33:15) - The rest of the features here were on the previous Diamond Edition release and are all pretty great. This one is an amazing featurette about how the film was actually made, the music (featuring current composer Michael Giacchino--who has done the music for Wall-E, UP and most recently Inside Out and Jurassic World--talking about it), making the film during the Great Depression, the growth of their studio, etc.

Bringing Snow White to Life (11:35) - This featurette talks about the "9 Old Men"--the famous Disney animators--and how they had had their own mentors too. It's a really inspiring segment.

Hyperion Studio Tour (30:36) serves as a flashback at the studio back in the 30's when Walt and his team were making the film. We hear real stories from the animators about what it was like to work on the movie, as well as with Walt. We see actual reference footage they filmed of live action actors to use as a guide for the animation, archival photos -- and even hear about pranks the animators played on each other.

Decoding the Exposure Sheet (6:49) - Here we learn about something called an "exposure sheet" and get to see one of the 1,300 they had made for the production. This one in particular is for the scene where Snow White runs up her balcony while the Prince sings to her. We also learn here that an edit was "ordered" only 6 days before its premiere!

Snow White Returns (8:44) - Apparently some unused art was discovered in the vault under the name "Snow White Returns," but no one knows what it was intended for. We find out that it contained 2 scenes of the dwarfs that had been cut from the main film. For this, they created a Snow White Returns mock up story with rough animation and voices.

Story Meetings - There are two "Story Meetings" that feature reenacted voices of what some of the story meetings would have sounded like. The first is about The Dwarfs (5:51) and the second is about The Huntsman (3:55).

Deleted Scenes - There are two full deleted scenes. The first is titled "Soup Eating Sequence" where there's an unused song as the dwarfs eat soup and Snow White tries to teach them manners (4:07). It's unfinished but fully animated. The second, titled "Bed Building Sequence" (6:28), shows the dwarfs building a bed in the forest as a gift for Snow White.

Animation Voice Talent (6:20) - Lastly, the film's animators (and other Disney animators) reflect on the voice talent for the film.

Blood/Gore: The Evil Queen suddenly turns into an old hag and we see her hands looking scary and gnarly; We see the bones of a previous victim of the Queen in a jail cell.

Violence: A man with a knife slowly comes up behind her but drops it; Snow White falls down a hole while in a scary forest with scary trees that jump at the screen and terrorize Snow White; The dwarfs cautiously approach their house with pix axes raised; The dwarfs accidentally attack Dopey thinking it's the intruder; The dwarfs cautiously walk around their house with clubs raised; The dwarfs grab Grumpy and force him toward the tub; The Evil Queen opens a box and says there is a heart in the box. We don't see it but she thinks it's Snow White's heart. We soon learn it's a pigs heart; The Queen makes a potion to turn her looking old. We see her suddenly turn and look creepy and scary; After Snow White tastes the poison apple, and we see her hand drop to the floor and the apple roll out of it; Lightning hits a rock, causing the hag to fall from a cliff. A large boulder follows, presumably falling on top of her, but we never see this. Disclaimer: All reviews are based solely on the opinions of the reviewer. Most reviews are rated on how the reviewer enjoyed the film overall, not exclusively on content. However, if the content really affects the reviewer's opinion and experience of the film, it will definitely affect the reviewer's overall rating.