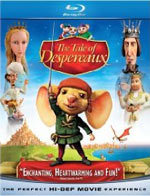 The Tale of Despereaux

Once upon a time, in the faraway kingdom of Dor, there was magic in the air, raucous laughter aplenty and gallons of mouth-watering soup. But a terrible accident left the king broken-hearted, the princess filled with longing and the townsfolk despondent. All hope was lost in a land where sunlight disappeared and the world became dreary gray. Until Despereaux Tilling was born... A brave and virtuous mouse, Despereaux is simply too big for his small world. Though tiny, wheezy and saddled with comically oversized ears, Despereaux refuses to live a life of weakness and fear...believing he was destined to be celebrated in the tales of chivalry he so adores... (from MovieWeb.com)

As Pixar, DreamWorks, and even now Fox Studios to a degree, have become forces to be reckoned with in the animated feature department, it's not too much of a surprise that the humble release of The Tale of Despereaux from Universal Pictures last Christmas didn't garner much attention or box office success. Upon viewing the film on DVD (which looks remarkable on Blu-Ray disc), I can see why the movie wasn't a greater success, but it's not because of a lack in quality of the production; hardly so. The Tale of Despereaux has ambitions as great as its giant-eared main character, as it aims to be a modern classic fairytale unlike most films released today.

Offering a look that bears a storybook-come-to-life feel, The Tale of Despereaux is much more driven by fantasy and story than the kinds of comedy or entertainment value that films like those from DreamWorks or Fox. In fact, Despereaux is more like the kind of story that the Shrek series parodies (not that there's anything wrong with that). While the execution of the storytelling (which is based on a book by Kate DiCamillo), or perhaps the story itself, doesn't quite seem to have all the ingredients to truly be a modern classic, DiCamillo's story would appear to have what it needs. We have a King, a Queen, a Princess, talking animals, a damsel in distress, an evil villain, peril, and an unlikely hero, but in the midst of elements of familiarity, there seems to be something missing.

Part of the film's problem may lie within its pacing. The story moves a little slow, which works fine for adults watching who have longer attention spans, but for the children it's aimed at, there's a good chance they may get bored before the film really gets moving. The visuals are certainly not an issue, however. The backgrounds are beautifully painted and textured, with gorgeous lighting and vivid colors. The making-of featurette on the DVD delves a bit into the look of the film, and it truly does contain some impressive artwork. It's the kind of film Blu-Ray was made for. There is a surprising lack of comedy in Despereaux, which lends to the overall serious tone of the movie. Despereaux himself is a pleasure to watch, nicely voiced by Matthew Broderick, but chunks of the film have little to do with our title character, which leaves him feeling slightly under used. To its aid, all of the film's voice acting is superb -- from William H. Macy voicing the titular mouse's jittery father to Emma Watson, of Harry Potter fame, tenderly voicing the princess. Between the voice acting and the lush visuals, The Tale of Despereaux still has a lot going for it.

The Tale of Despereaux centers around a theme of forgiveness and redemption, which is a great lesson for both young and old. The tale helms from within the kingdom of Dor, a land where the people's love for soup is celebrated above any other holiday, and joy fills the land. But on the fateful day when a friendly rat accidentally falls into the Queen's bowl of soup, causing her to panic, have a heart attack, and die, the land of Dor changes for ever. In the King's anger and despair, he banishes soup altogether, along with rats, and everything that apparently brought happiness and light to the people of Dor. It isn't until the birth of Despereaux that rays of hope begin to shine for Dor. Despereaux defies the mouse culture by being brave instead of fearful and therefore becomes banished from Mouseworld after his fellow mice learn that he's been reading a fairytale in the library (instead of eating the book!) and talking to the King's daughter. Despereaux finds new purpose in trying to restore hope to the hopeless, and soon has to rescue the Princess from the clutches of the rats. Of course the ending does have a satisfying conclusion, driving home the message of forgiveness and new beginnings, but the process of getting to this conclusion may not be what viewers are expecting. While the previews for the film do their best to make the movie seem lighthearted and fun, this isn't Shrek, Flushed Away, Over The Hedge or Toy Story kind of fun and adventure. Despereaux deals with some heavy themes and topics that are certainly redeemable, but its execution is an acquired taste. At times, it wants to be a fantasy (the film never explains why in the world there is a talking character made completely out of vegetables from the royal cook's kitchen that just randomly roll together... and it's the only character even remotely like this), and othertimes it seems to want to be some kind of animated drama. Perhaps it's this slight imbalance that does some disservice to the film.

The content of Despereaux is mild. No profanity or crude humor find its way into the film, which helps keep it safe for the young ones. The rats are a little creepy - particularly an old blind one who turns out to be friendly and the slithery head rat, Botticelli. The movie's finale may be a bit intense too as it involves the rats threatening to eat a defenseless character in a large arena. Earlier in the movie we see the same arena where a massive cat (in proportion to the rats) chases a mouse around the theater for sport and amusement of the rats. But aside from these moments, there isn't really anything in Despereaux that warrants exercising caution.

When all is said and done, The Tale of Despereaux is an enjoyable family-friendly film that takes itself pretty seriously, almost a little too much. But for those who have a soft spot for classic fairytales, stories about kings, queens, and princesses, and even for those who enjoy a good little mouse story, The Tale of Despereaux captures enough of the inteded magical and adventurous spirit to make it an entertaining and worthwhile watch.

Alcohol/Drugs: We see some characters drinking wine and such

Violence: Knights chase Roscuro around with weapons trying to kill him. He later accidentally falls into a bowl of soup that the Queen was eating and she suddenly has a heart attack when she sees the rat (thinking it was in the soup the whole time) and dies. The knights then chase him again and he falls through a grate into darkness (and lands in a sewer); The mice talk about how the rats want to kill the mice and eat them (but we don't see any of that); Despereaux imagines a fairytale involving a heroic knight and we see him battling a dragon and fighting off other knights with a sword, then dropping a wooden platform on top of some (none of it is graphic); Despereaux is dropped down into a sewer; A guard swats Despereaux into a wall; we see Despereaux in an arena where a chained cat swats at and tries to kill the little mouse. Roscuro then pretends to want the mouse himself to eat him and pretends to forcefully push him through the crowd all the way back to his private quarters. He does all of this, however, just to save his life; a guard slaps a food tray out of Miggory's hands; Miggory slashes at a painting of the princess with what looks like a spoon; Despereaux stabs Andre in the foot with a pin to get his attention; Despereaux and a man made out of pieces of fruits and vegetables are attacked by rats. The creature's is then pulled apart (not graphic or gross -- it's just pieces of fruit and vegetables) and Despereaux is briefly knocked out; We see the princess tied up in the arena with the rats just waiting to eat her. Despereaux then comes to the rescue and unleashes the cat. Later a rat threatens to feed Despereaux to the cat but is itself knocked into the arena and into the cat's pen which it jumps back into and eats him (also not graphic or shown) Disclaimer: All reviews are based solely on the opinions of the reviewer. Most reviews are rated on how the reviewer enjoyed the film overall, not exclusively on content. However, if the content really affects the reviewer's opinion and experience of the film, it will definitely affect the reviewer's overall rating.