To celebrate the band's new independent status free from Columbia Records, their tour with Relient K and Ruth, and their support of Habitat For Humanity, Switchfoot has released a brand new song entitled "Rebuild" for free online. Frontman Jon Foreman announces...

Hey my people,
Happy Fall! I am proud to announce the first Switchfoot song from Lowercase People Records is now available. As an independant band this is a big step for us and we hope you enjoy the tune. It's a song called "Rebuild" that features Matt from Relient K and Dustin from Ruth. I wrote it with Matt for an organization called Habitat for Humanity, and more specifically for this Fall tour - The Appetite for Construction Tour. Proceeds from the song and the tour are going to Habitat.
So go to switchfoot.com to check - check - check it out,
Peace! jon"

Switchfoot.com offers a more official announcement and letter from the band, as well as links to either donate to Habitat or download the song for free. The letter reads...

My name is Jon Foreman- I play guitar in a band called Switchfoot. Many of our songs have deeply personal stories behind them. This one, "Rebuild" has a story that grew even bigger after the song was written.

This summer, Matt Thiessen and I began to write a song specifically for our fall tour, the "Appetite for Construction tour where a dollar from each ticket sold will go to Habitat for Humanity. The song, (written with Habitat in mind) was called "Rebuild." Afterwards, we said our goodbyes and both bands parted ways and drove on down the road. Hours later his bus burned down. After the flames died down, the song and the tour had a much deeper meaning.

Now, as our hometown of San Diego recovers from the worst fires we've ever been through, this song has a deeper meaning still. I've spent the last week on tour trying to find out if friends and family are ok. It's been an incredibly helpless feeling. And though we're far from home, we've been trying to figure out ways that we can help.

So we came up with this idea, more than just giving a dollar a ticket this tour we've decided to give a song away. We love giving things away whenever we can, our hope is that you do too.

Download the song, "Rebuild" and give your money or your time directly to Habitat for Humanity. That way you don't need to even live in California, you can still help in your own backyard. If you've got extra cash, cool. If not, donate your time instead. Habitat is an incredible organization that has built houses from New Orleans to New Delhi for deserving individuals. After the fires die down we'll need a lot of help in San Diego.

The song features someone from all three bands on tour: ourselves, Matt T. from Relient K and Dustin from Ruth on harmonica. The song means a lot to me and I hope you enjoy it. Now is the time to rebuild. Please join us.

For more information about Switchfoot, visit our Artists Database. 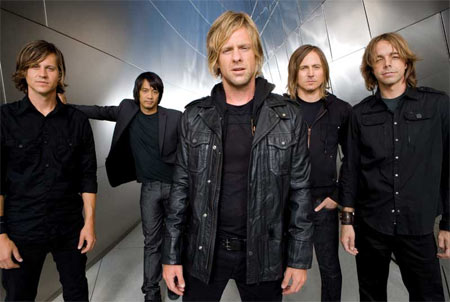