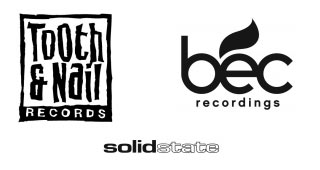 Here is the latest late 2009 / early 2010 news on Tooth & Nail
's label family of artists, thanks to Overture Media...
IN THE STUDIO
Adie is putting the finishing touches on her sophomore worship-oriented album with producers Steve Hindalong and Marc Byrd, which is due Spring 2010. For updates on the new album, become Adie's fan on Facebook http://www.facebook.com/pages/Adie/6155086443

Children 18:3 going into the studio in December to work on their second record - this will be the follow-up to the HIGHLY acclaimed self-titled debut.

Demon Hunter has been recording in the studio this past month finishing up in November for their 2010 studio release.

Since October is finishing up their sophomore record with Travis Wyrick. The band is posting studio updates on their official YouTube channel: http://www.youtube.com/user/sinceoctobertv#p/a

Haste The Day with Devil Wears Prada, All That Remains, Story for the Year hits the road November 20th - December 21. For the tour dates & markets you DON’T WANT TO MISS http://www.myspace.com/tdwp


AMERICAN MUSIC AWARD NOMINATION
Jeremy Camp was nominated last month for his second American Music Award Nomination. This is a FAN VOTED award via online voting. (http://abc.go.com/shows/american-music-awards/vote) Voting closed November 13th, so be sure to hop online and vote!  The awards air live on ABC on November 22nd.
50 ALBUMS FOR $5 ON AMAZONMP3.COM FEATURES KUTLESS
AmazonMP3 editors picked 50 great albums to share with you for just $5 each - including the new worship-oriented project “It Is Well” from Kutless. So grab Kutless’ album for $5 this month. http://bit.ly/2qzk8Z

AC Indicator:
Kutless "What Faith Can Do" at #4
Jeremy Camp "Speaking Louder Than Before" at #11
Bebo Norman "Never Saw You Coming" #20
FM Static "Take Me As I Am" at #24
Seventh Day Slumber "From The Inside Out" New & Active

CHR:
Kutless "What Faith Can Do" at #3; highest spin increase
Hawk Nelson "Meaning Of Life" at #6
Seventh Day Slumber "From The Inside Out" at #12
Thousand Foot Krutch "Forward Motion" at #15
Run Kid Run "My Sweet Escape" at #20
The Letter Black "Best Of Me" at #25
Bebo Norman "A Million Raindrops" New & Active