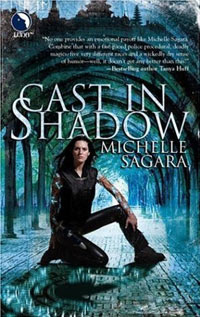 This is one cool book. In Cast in Shadow, Kaylin lives in Elantra, a land ruled by the Lords of Law. She is a Hawk - one of the many that serve Lord Gammayre at protecting the city (this canon has many resemblaces to the feudal period). However, when people just outside the city in the feifs begin dying, Kaylin is called to investigate with two accomplices. She will have to learn to move beyond her past, to be on time, and to accept her fate.

This book is really engaging. I like how intricate Kaylin is. She's a strong character, and every character is beautifully fleshed out. But since every character is so deep, they each have counterbalances too. Marrin, the caring orphanage mother, is balanced by Marcus, one of Kaylin's strict superiors. I loved the fact that each character was just so diverse in their actions; even the Barrani, who all look very similar to Kaylin, can be told apart by their dialog. Each character is like a real person, and I think more characters need to be written that way in books.

There are also some very deep themes there as well. For example, Kaylin has (notoriously) failed all of her theory classes except languages. Language plays an important part in the story, and three or four are mentioned throughout. A major theme is that words have power. Power to destroy and power to build. Kaylin has to learn about the power of names over people, and it's interesting. We take words for granted every day, but I don't think we quite understand the effect language has on us or others. Imagine if we didn't have a language...it would be so hard to communicate! In fact, there would be no way to do so. This song by Hawk Nelson is a good summation of some of the power that words can have: "Words can build you up / Words can break you down / Start a fire in your heart / Or, put it out."

Kaylin encounters words no one can even read because they are so powerful, those who attempt are killed by the sheer power of them. People thought that Harry Potter had a good theme about the power of names. This book has a different message about the power of language, and the way it can build and break.

Normally. I reccomend books for teens and up, but this time I think this book would be appropriate for anyone ten and up. This is especially one I think that would make a good audiobook for traveling. It's dark enough to be intriguing, but there's enough humorous lamps along the way to keep it from becoming depressing as well.