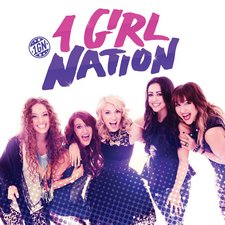 Sometimes the art of criticism can too often focus on the reviewer's personal preferences. Viewed through the prism of likes and dislikes, it's all to easy to forget for whom the piece of art is intended. In the case of new girl group, 1 Girl Nation, it's easy for this reviewer to understand the intended audience of music such as this, because there are two of them living directly under my roof.

From the moment I put 1 Girl Nation's self-titled debut on their stereo, my two daughters have been rabid fans of the group, memorizing every song, inventing dance routines to the music and dropping lyrical references into dinner conversations about serious subjects.

With that understanding in mind, it's my genuine pleasure to report that for a manufactured, talent-search-driven, pop group, 1 Girl Nation delivers an upbeat, catchy and occasionally mature effort that aims dead-on for the girl "tween" set. Opener "While We're Young" is a hooky anthem for making important decisions now and not after the heart ache has set in. "Vertical" takes a few cues from Lady Gaga and achieves maximum dance revolution while delivering one of the best hooks on the album. It's refreshing to hear music of this nature without the fairly standard sexualized lyrics of much of secular pop. A few more highlights are the slowed-down "Turn Around" and "In The Eyes," a song with an "image theme" that is handled well. "Daddy's Girl" could have been an awful example of turning a lazy phrase, but it is actually a simple piano song that handles its double entendre well and without musical over-production.

On the other hand, a few cringe-worthy raps mar the otherwise nifty "Count Your Rainbows" and a few silly lyrics (even for tween pop) reduce the sincere "Live For You" to the rank of embarrassing. "I can't think, can't think when I feel your grace / 'cause you love me up to outer space" is a throwaway lyrical idea that somehow became the centerpiece of the tune.

But by the time "1 Girl Nation" closes the album out, with its call to love the outcasts among us, it's clear that despite its flaws, 1 Girl Nation's debut album rises above the common cliché's of tween pop, and delivers an encouraging blast of musical fun.

Many an opponent of the teen-pop genre has put forth the idea that the average under-20 group is nothing more than a randomly-assembled set of performers selected to sing fluffy, light-hearted tunes penned by a stable of outside writers. Then again, these are usually the same naysayers who sit glued to Nickelodeon Jr. every Saturday morning for four hours straight - all for their kids' sakes, of course. While the members of 1 Girl Nation did audition to join the group and their debut outing could probably earn them serious time on, say, the Disney Channel, the record itself is a welcoming combination of youthful exuberance, razor-sharp harmonies and hooks big enough to hang a winter coat on. Hopping nimbly from club-oriented dance-pop and blue-eyed funk to bracing arena-ready anthems and poignant piano ballads, the project's most truly moving moment comes with "In the Eyes," a consummately-delivered cut that takes on the now-ubiquitous subject of godly self-image with near-transcendent results. Duff tracks crop up here and there, and the album isn't going to woo too many in the hard-rocking or indie-loving crowds. Taken on its own merit, though, the freshman 1GN effort shines a decidedly optimistic light on the enthusiastic and talented quintet that graces its ingratiatingly catchy grooves. - Bert Gangl, 8/6/13