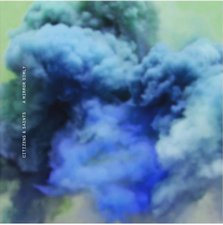 
Citizens & Saints has quickly become a worship band whose albums I actually anticipate (which is, sadly, not a common occurrence these days for worship music). After Zach Bolen's excellent, self-titled release earlier this year, the announcement of A Mirror Dimly became that much more exciting. Dropping the heavy electronic sound that dominated Join the Triumph, Citizens & Saints' latest album is chock full of worshipful rock and roll.

Like their former Mars Hill counterparts, Citizens & Saints albums had always consisted of songs shared amongst the church's bands, as well as hymns and originals. However, as with recent releases from Kings Kaleidoscope and Ghost Ship, A Mirror Dimly has shied away from anything but original material, with nine brand new songs. They've done a terrific job with hymns in the past, but it's nice to hear a full album of their own songs. The result is a setlist that goes back and forth between worshiping the Lord and helping the saints of God to remember that that's what we are: His saints. Right in the middle of the album, we get two instances of the latter. "Day By Day" has lyrics that require a knowledge of the depths of God's grace to understand it: lyrics like "Even when I'm at my worst, I am still of righteous birth" and "When I run like wildfires, I am still a ransomed child" may sound like a "once saved, always saved" kind of doctrine at a glance. However, it serves as a great reminder of our status as new creations in the sight of God - "kids of grace," as the next song would say. Though the song is a bit cheesy and simple, lyrically, "Kids" also reminds us that God set us free from sin and adopted us into His family as His own children. In addition to being encouraging, these two songs also have a great, upbeat rhythm and are irresistably catchy indie/pop rock songs.

Though these two songs are highlights, for sure, my personal favorite song is a gem called "Relent." It feels like a bit of an epic, anthemic worship song that would probably be very popular if Hillsong United got ahold of it. The verses are a little hi-hat-heavy and have a rhythmic bass driving them, and Bolen sings about the worthlessness of all the world has to offer. For the Christians who have truly turned from the world, it becomes a very relatable song, as Bolen sings, "I have traded cherished truth for worthless lies, raging through the earth for treasure I couldn't find, wallowed in the mud for nothing but my pride, and I'm so tired."

Looking back on Join the Triumph, though it was an album that really had to work hard to grow on me, it ended up as being a solid member of the band's discography. A Mirror Dimly has also grown on with me with multiple listens, but I already loved it from the get-go. First, it's a great companion to Bolen's solo album, 1001, as it has the same passion and style that the band shows here. Second, it demonstrates Citizens & Saints' continued growth as songwriters and musicians. If you've followed the band and have enjoyed the ride, you will not be disappointed with A Mirror Dimly. And if you're new to the band, the other albums are recommended listens, but this isn't a bad place to start.

In an industry where radio-friendly worship is all too common, acts like Citizens & Saints prove that the genre can be delightfully unpredictable and authentic. Their latest offering, A Mirror Dimly, showcases Citizens' awe and reverence for God in both the lyrics and the music, and this concise album does not miss a beat. Mirror shines most when Citizens bring out the synths, adding funky flair to tracks like "Faith" and "Kids." What this group does best, though, is add ambiance to their sound, transporting the listener with reverbed clean guitar chords and echoing background vocals, like in the ponderous "Madness" and the epic closer "Doubting Doubts." Occasionally lead vocalist Zach Bolen sounds like former Mars Hill labelmate Dustin Kensrue, which is certainly not a bad thing. Those who like worshipful indie rock, as well as those who enjoyed Kensrue's The Water and the Blood, will want to give A Mirror Dimly a listen. - Review date: 9/17/16, Nicole Marie Vacca