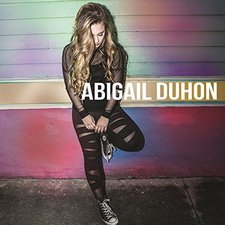 
For being just 17 years old, Abigail Duhon has been rather active in the Christian entertainment industry. Aside from acting in the God's Not Dead films, she has one full-length album and EP under her belt previous to her latest, self-titled effort. On her most recent release, Duhon introduces three new tunes alongside three songs that appeared on her independent EP with a musical range shifting from electronic pop songs to a couple piano driven tunes.

The strength of the EP is a series of encouraging and empowering anthems to help a Christian along in the faith. "I'm Not Ashamed" shows resolution in the face of potential conflict as the lyrics muse, "Every life has a time they reach the moment/When they have to choose what they believe." On "Rebound," Duhon strives through attacks from the enemy, singing, "Is my soul forever broken?/Is my heart beyond repair?/Cause my wounds you left are open /And I'm struggling for air," ultimately confident that in Christ she'll survive. "More Than Gold" is an encouraging song, perhaps from God to someone questioning the value of their life. The EP's musical highlight is "Dance Up," which contains a catchy beat and a welcome addition in Spencer Kane.

While, musically, the album passes as good tween pop, its main weakness lies in the lyrics, which at times can be clunky and confusing. For instance, "Rebound" starts off addressing an enemy and then turns to address God. Playing the pronoun game of who "you" is doesn't enhance the listening experience. Some of the songs also suffer from the blurry line of being either about God or a boyfriend. The worst line opens the collection on "Into the Light" where Duhon sings, "You don't know what You mean to me." If this is to a love interest, it's fine, but if she's singing to God (the song never makes it 100% clear), the line comes off as arrogant. I'm sure if anybody knows how much they mean to us, God does.

Although the lyrics suffer from lack of depth or clarity, they show great potential. Considering that Duhon is in her teens and that these songs would appeal to junior high and high school students, this self-titled EP works well enough. But my hope is that, as Duhon grows in her artistic ability, the lyrics and music will age with her. If you're looking for music to play at youth group, these songs should be a hit, especially "Dance Up." But if you're looking for Christian pop songs with depth to them, maybe you may need to wait for her next release.