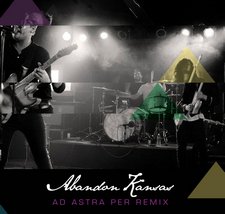 For those who don't know Abandon Kansas, the easiest way to explain them is this: your stereotypical indie rock band. If you're into the indie rock scene, then this is something you would like; enough said. They have put out two full-length albums over the past two years, but have recently decided to release a fan-driven remix EP.

The first track is "Heaven Come My Way," which in its original state is a pretty good rock tune with cleverly written lyrics, such as "I wish I didn't have to leave, but that doesn't mean I'll stay." However, the drastic change to the music in this remix version is simply awful. It screams badly done electronica/experimental and simply ruins what is otherwise a good song. "Golden State" is basically the exact same as the previous track with the addition of a rather boring chorus to go with the horrible background music. Last up on this trio is "Like It Or Not" which is probably the best listen you'll find on this short EP. It's a pretty good indie song, but again the musical aspect makes it not worth listening to.

Simply stated, this remix project was not a good idea. I can appreciate the creative bones of the band's fans coming out, but the overall product is severely lacking. I'm confused as to why a rock band like these guys would take their own songs and simply play club music in the background. Even the biggest Abandon Kansas fans will likely steer clear of this remix EP.

2011 was kind to Abandon Kansas. With Gotee's release of Ad Astra Per Aspera, new fans got a much more fleshed-out impression of the indie rockers and their potential to write poetic and catchy material. Topping off their year, however, is the three-track Ad Astra Per Remix EP, which is exactly what it sounds like. Outsourcing the remixing to Eric Kaufman, Capital Kings, and Seth Duncan, the band opts for an electronic base on all these songs without a single traditional instrument in sight. In a way, none of these quite feel like true "remixes" with only Jeremy Spring's vocal work kept nearly intact (with only minimal vocal distortion). Both "Heaven Come My Way" and "Like It Or Not" are truly uninteresting at best with this new, sometimes fuzzy, treatment, even bordering on obnoxious, though "The Golden State" fares a bit better with a recognizable electronic adaptation. Remixes are never meant to replace their original counterparts, but their purpose isn't met when they're not very enjoyable. It's easy to conclude that Ad Astra Per Remix EP was a great idea on paper, but the execution was far less so. - Review date: 1/7/11, written by Roger Gelwicks of Jesusfreakhideout.com