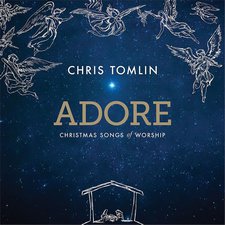 
Around October, some stores start putting out their Christmas decorations, and they usually start playing Christmas music mid- to late-November. A fair amount of patrons (and people with Facebook) love to complain about this. "It's not even Halloween yet!" you hear. And while I do understand the frustration, I tend to lean more toward the side that says "Yay, Christmas is coming!" This makes it a little easier to listen to and review Christmas music in early October, which is when I received my first Christmas album of the year, that of worship artist Chris Tomlin.

Adore: Christmas Songs of Worship is a live album that really emphasizes the "worship" portion while keeping the Christmas theme, as Tomlin and company utilize classic Christmas carols, such as "Midnight Clear," "Silent Night" and "What Child Is This?" to bring the band and audience together to lift up the King of Kings. That being said, Tomlin's Christmas offering is not classically-styled like Nat King Cole, nor is it alternative like what Tooth & Nail/BEC tend to offer up every now and then. Rather, it's an album that fits alongside any other Chris Tomlin album, with slow and, at times, sleep-inducing renditions of these carols. Additionally, I felt like Kristyn Getty's reading of Isaiah 9 in "Hymn of Joy" was more on the cliche side than on the reverent side. Though the Bible has life-giving power and is the most blessed writing in existence, reading Old Testament prophecy of Jesus' birth just seems more like something you're obligated do on a Christmas album these days. I do have to give credit where credit is due, though: "It's Christmas" is a jazzy medley of sorts, featuring "Away In A Manger" and "Go Tell It On The Mountain," and sounds like something you'd hear during a montage in a family Christmas movie from the 90s. It's actually very entertaining; far and away the best track on the whole album. Distant runners-up are "What Child Is This?" (which loses points for leaving out the second verse) and "A King Like This," which bears little artistic merit, but has a somewhat pleasing melody.

Chris Tomlin has dominated the contemporary and modern worship market for years now, and he shows no sign of stopping. Last year's Love Ran Red sold as well as previous entries, and Adore: Christmas Songs of Worship will keep that momentum going for sure. As mentioned before, it has some shining moments, but it's not enough to warrant a purchase unless you're a diehard Tomlin fan. If you're already interested in Christmas music for the 2015 season, I'd recommend skipping this one and going with Rend Collective's new Christmas album, Campfire Christmas, Vol.1, which releases the same day.